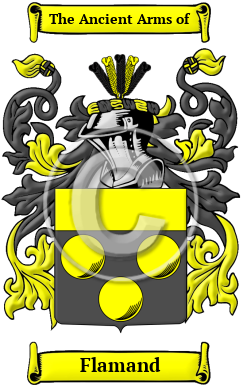 Early Origins of the Flamand family

The surname Flamand was first found in Normandy (French: Normandie), the former Duchy of Normandy, where the family held a family seat since ancient times. However, some of the family were part of the Norman Conquest of England as early records of Bishop's Middleham, Durham revealed. "This place is of considerable antiquity: its church was given in 1146 to the convent of Durham, by Osbert, nephew of Bishop Ralph Flambard; and soon afterwards, the manor appears to have been conveyed to the see of Durham, the bishops of which resided here, up to the end of the 14th century. Their castle was situated on a lofty brow of limestone, overlooking the marshy level of the Skerne." [1]

Early History of the Flamand family

This web page shows only a small excerpt of our Flamand research. Another 82 words (6 lines of text) covering the years 1808 and 1811 are included under the topic Early Flamand History in all our PDF Extended History products and printed products wherever possible.

More information is included under the topic Early Flamand Notables in all our PDF Extended History products and printed products wherever possible.

Flamand migration to the United States +

Flamand Settlers in United States in the 18th Century

Flamand Settlers in Canada in the 17th Century