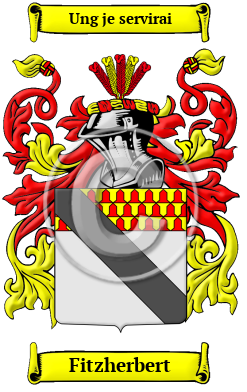 The name Fitzherbert reached English shores for the first time with the ancestors of the Fitzherbert family as they migrated following the Norman Conquest of 1066. The name Fitzherbert is based on the English, French, and German personal name Herbert, is made up of the elements, heri, which means army, and berht, which means bright. The prefix Fitz indicated that the bearer was the son of someone named Herbert.

Early Origins of the Fitzherbert family

The surname Fitzherbert was first found in Derbyshire where this ancient Norman house was seated at Norbury, by the grant of the Prior of Tutbury in 1125. [1] The family assumed their surname from a Norman knight who appeared in the honor rolls of the Battle of Hastings.

Robert Fitzhubert ( fl. 1140) was a "freebooter, and is first mentioned in 1139. His origin is not known, but he is spoken of as a kinsman of William of Ypres [q. v.], and as one of those Flemish mercenaries who had flocked to England at Stephen's call. On 7 Oct. 1139 he surprised by night the castle of Malmesbury, which the king had seized from the Bishop of Salisbury a few months before, and burnt the village. The royal garrison of the castle fled for refuge to the abbey, but Robert soon pursued them thither, and, entering the chapter-house at the head of his followers, demanded that the fugitives should be handed over. The terrified monks with difficulty induced him to be content with the surrender of their horses." [3]

Early History of the Fitzherbert family

It is only in the last few hundred years that the English language has been standardized. For that reason, Anglo-Norman surnames like Fitzherbert are characterized by many spelling variations. Scribes and monks in the Middle Ages spelled names they sounded, so it is common to find several variations that refer to a single person. As the English language changed and incorporated elements of other European languages such as Norman French and Latin, even literate people regularly changed the spelling of their names. The variations of the name Fitzherbert include FitzHerbert, Fitz-Herbert, Fitzherbert and others.

Outstanding amongst the family at this time was Ralph Fitzherbert (died 1483), Lord of the manor of Norbury, Derbyshire; Sir Anthony Fitzherbert (1470-1538), an English judge, scholar and legal author, best known for his treatise on English...
Another 36 words (3 lines of text) are included under the topic Early Fitzherbert Notables in all our PDF Extended History products and printed products wherever possible.

Fitzherbert migration to the United States +

Faced with the chaos present in England at that time, many English families looked towards the open frontiers of the New World with its opportunities to escape oppression and starvation. People migrated to North America, as well as Australia and Ireland in droves, paying exorbitant rates for passages in cramped, unsafe ships. Many of the settlers did not make the long passage alive, but those who did see the shores of North America were welcomed with great opportunity. Many of the families that came from England went on to make essential contributions to the emerging nations of Canada and the United States. Some of the first immigrants to cross the Atlantic and come to North America carried the name Fitzherbert, or a variant listed above:

Fitzherbert Settlers in United States in the 17th Century

Fitzherbert Settlers in United States in the 19th Century

Fitzherbert Settlers in New Zealand in the 19th Century