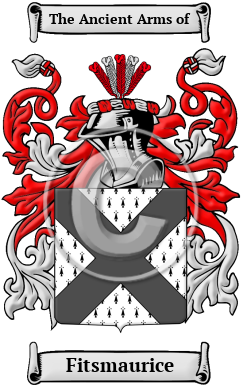 The Anglo-Norman invaders, if they could be called that since their movement into the eastern portion of Ireland was relatively peaceful, added their old Norman conventions for surnames to the previously established Irish system for hereditary surnames. One of the most frequent forms of surnames for both cultures was the patronymic surname, which was formed from the name of the original bearer's father or grandfather. The Norman tradition that the Anglo-Normans brought with them used diminutive suffixes such as "-ot," "-et," "-un," "-in," or "-el." to demonstrate the bearer's relation to the male relative. Occasionally, two suffixes were combined to form a double diminutive, as in the combinations of "-el-in," "-el-ot," "-in-ot," and "-et-in." The Normans also formed patronymic surnames in a manner very similar to the Irish: they simply added a prefix to their father's name. These Anglo-Norman people, however, used the prefix Fitz-, which was derived from the French word "fils," and ultimately from the Latin "filius," which both mean "son." Although this prefix probably originated in Flanders or Normandy, it can now only be found in Ireland. The surname Fitsmaurice is derived from Mac Muiris. The name means "son of Morris." The personal names Maurice and Morris are derived from the Latin name Mauritus, which is itself a derivative of Maurus.

Early Origins of the Fitsmaurice family

The surname Fitsmaurice was first found in Kerry, Galway and Mayo. "No more illustrious name than Fitz Maurice is to be found in the annals of Ireland, for it was borne during several generations by the descendants of Maurice Fitz Gerald, the founder of the great historical house of Geraldine. He was companion-in-arms of the redoubtable Earl Strongbow, and by his gift Baron of Naas and Wicklow. One of his sons was the ancestor of the Earls of Kildare and Dukes of Leinster-Premier Dukes of Ireland; from another sprung the princely Desmonds, and a line of seventeen powerful Earls." [1]

Early History of the Fitsmaurice family

Since the early scribes and church officials who recorded names in official documents spelled a person's name as it sounded to them, a single person's name was recorded under several different variations and which today appears to denote more than one person. Among the many spelling variations of the surname Fitsmaurice that are preserved in archival documents of this era include Fitzmaurice, Fitzmorris, FitzMaurice, FitzMorris, Morris and many more.

Migration of the Fitsmaurice family

The late 18th saw the beginnings of a steady pattern of immigration out of Ireland. These initial settlers were drawn to North America by the promise of land. The prospect of their own tract of land to work solely for themselves was especially appealing to those that rented out farmland in Ireland from English landowners who were frequently absent. These immigrants were critical to occupying the land of the eastern United States and British North America. This pattern continued steadily until the 1840s when the Great Potato Famine sparked a major exodus of Irish families. Unlike their predecessors, the Irish were frequently destitute and desperate, and North America was regarded as holding more promise than trying to eke out an existence in Ireland - if they survived the disease and starvation that the famine had created. This great mass of people frequently experienced more racial discrimination by the general population when they arrived on North American shores, but they were warmly received by those industrialists with coal mines to work, products to manufacture, and railways to build. These Irish immigrants provided the nations of the United States and, what would later become Canada, with the cheap labor that was required for their rapid development as major industrialized nations. Whenever and however Irish immigrants came to North America, they were instrumental to its cultural, economic, and industrial development. Immigration and passenger lists have shown many early immigrants bearing the name Fitsmaurice: Charles, Jeremy, John, Michael, Patrick, and Thomas Fitzmaurice all arrived in Philadelphia between 1840 and 1870; John FitzMorris arrived in New England in 1773.