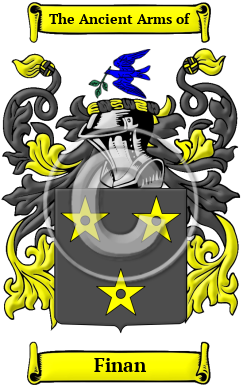 The roots of the Finan surname in Ireland are somewhat unclear; it seems that the name was both native Irish Gaelic, and Norman. The Gaelic name "ó Fionnáin" seems to be derived from Gaelic word "fionn, "which means "fair." This Gaelic name has been Anglicized as Finan and Fanning, both of which are also Norman names that came to Ireland in the 12th century.

Early Origins of the Finan family

The surname Finan was first found in County Mayo (Irish: Maigh Eo) located on the West coast of the Republic of Ireland in the province of Connacht, where they were of the Hy Fiachrach Sept. One notable bearer of the personal name who lived several centuries prior to the introduction of hereditary surnames was St. Finan (Finan of Lindisfarne) who died in 661 AD, and achieved repute for his missionary work in England. He was Bishop of Lindisfarne (651-661) and he converted the kings Sigebert of Essex and Peada of the Middle Angles to Christianity. [1]

Early History of the Finan family

This web page shows only a small excerpt of our Finan research. Another 63 words (4 lines of text) covering the years 1659, 1901 and 1847 are included under the topic Early Finan History in all our PDF Extended History products and printed products wherever possible.

More information is included under the topic Early Finan Notables in all our PDF Extended History products and printed products wherever possible.

Finan migration to the United States +

Finan Settlers in United States in the 19th Century

Finan Settlers in Canada in the 19th Century

Finan Settlers in Australia in the 19th Century