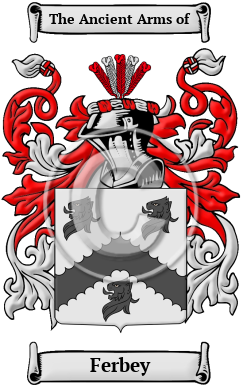 Early Origins of the Ferbey family

Early History of the Ferbey family

Only recently has spelling become standardized in the English language. As the English language evolved in the Middle Ages, the spelling of names changed also. The name Ferbey has undergone many spelling variations, including Fereby, Ferby, Furby, Ferbie, Furbie, Fearby, Fearbie, Fireby, Firby and many more.

Distinguished members of the family include George Ferebee, or Feribye, or Ferrabee (fl. 1613), an English composer from Gloucestershire. He was the son of a Gloucestershire yeoman, was born about 1573, and matriculated at Oxford 25 Oct. 1589, aged 16. " He was a chorister of Magdalen College until 1591. He was admitted B.A. 1592, licensed to be M.A. 9 July 1595, and became vicar of Bishop's Cannings, Wiltshire. Wood relates how Ferebe found and ingeniously made use of an opportunity to display his...
Another 83 words (6 lines of text) are included under the topic Early Ferbey Notables in all our PDF Extended History products and printed products wherever possible.

Migration of the Ferbey family

To escape the unstable social climate in England of this time, many families boarded ships for the New World with the hope of finding land, opportunity, and greater religious and political freedom. Although the voyages were expensive, crowded, and difficult, those families that arrived often found greater opportunities and freedoms than they could have experienced at home. Many of those families went on to make significant contributions to the rapidly developing colonies in which they settled. Early North American records indicate many people bearing the name Ferbey were among those contributors: the name represented in many forms and recorded from the mid 17th century in the great migration from Europe. Migrants settled in the eastern seaboard from Newfoundland, to Maine, to Virginia, the Carolinas, and to the islands..