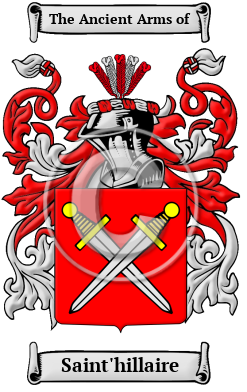 Early Origins of the Saint'hillaire family

The surname Saint'hillaire was first found in Normandy (French: Normandie), the former Duchy of Normandy, where they were formerly seated in the barony of Saint Hilaire de Sancto Hilario. The first of the name was James de Sancto Hilario who held the castle of St. Hilaire about the year 1100. James, who was the son of Harsculf de St. James who also held the castle of St. Hilaire, was the first to adopt the name of his castle for his surname. Saint Hilaire du Harcourt is in Manche in the arrondissement of Mortain, the canton of St. Hilaire du Harcourt.

Early History of the Saint'hillaire family

This web page shows only a small excerpt of our Saint'hillaire research. Another 87 words (6 lines of text) covering the years 1373, 1412, 1689 and 1770 are included under the topic Early Saint'hillaire History in all our PDF Extended History products and printed products wherever possible.

Another 31 words (2 lines of text) are included under the topic Early Saint'hillaire Notables in all our PDF Extended History products and printed products wherever possible.

Migration of the Saint'hillaire family