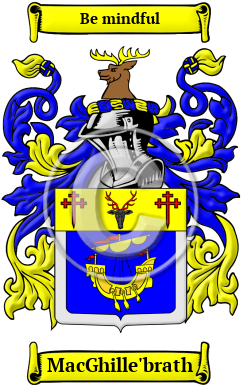 The Picts of ancient Scotland were the tribe of the ancestors of the MacGhille'brath family. The name MacGhille'brath is derived from a personal name meaning servant of judgement. The Gaelic form of the name is Mac Gillebhrath.

Early Origins of the MacGhille'brath family

The surname MacGhille'brath was first found in Argyllshire (Gaelic erra Ghaidheal), the region of western Scotland corresponding roughly with the ancient Kingdom of Dál Riata, in the Strathclyde region of Scotland, now part of the Council Area of Argyll and Bute, but this family seat was later moved to Iona with the advent of St. Columba. From this original descendancy came Giolla Brighid, known also as Gillibride, or Gillivray. Gillivray's son, Somerled, the 8th and greatest Thane of Argyll, Lord of Kintyre, and founder of the 'Kingdom of the Isles' was instrumental in driving out the invading Norse (Vikings) from his Kingdom, commencing in 1140 AD. However, Somerled, still gave allegiance to the King of Vikings which continued until 1222, long after Somerled's death in 1164 AD. At this time, Alexander II of Scotland routed many of the Clans 'of the Isles', leaving them eastern Scotland in an area from Glasgow north to Inverness to the East Coast. The MacGillivrays were moved northwards to Lochabe. They became closely associated with their neighbors, the McInnises, the McMasters, and the MacEacherns. They also joined the great Pictish confederacy of Clans known as the Clan Chattan, an association of some twenty six Clans, during the time of Ferquhard, 5th Chief of the MacKintosh, and Chief of the Clan Chattan.

Early History of the MacGhille'brath family

Notable amongst the Clan at this time was MacGillivray of Dunmaglass. The Hon. William McGillivray, son of Donald McGillivray of Dalscoilte, near Dunmaglass, was the head of the NorthWest Company fur trading...
Another 31 words (2 lines of text) are included under the topic Early MacGhille'brath Notables in all our PDF Extended History products and printed products wherever possible.

Migration of the MacGhille'brath family

In those unstable times, many had no choice but to leave their beloved homelands. Sickness and poverty hounded travelers to North America, but those who made it were welcomed with land and opportunity. These settlers gave the young nations of Canada and the United States a strong backbone as they stood up for their beliefs as United Empire Loyalists and in the American War of Independence. In this century, the ancestors of these brave Scots have begun to recover their illustrious heritage through Clan societies and other heritage organizations. Early passenger and immigration lists reveal many Scottish settlers bearing the name MacGhille'brath: Alexander, Donald, Fargus, James, John, Loughlin, Owen, and William MacGillivray, who all arrived in South Carolina in 1716; Donald McGillivray, who settled in Ontario in 1794.