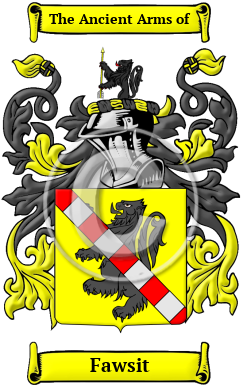 The name Fawsit is derived from an ancient word meaning "fox on a hillside." Fa’side Castle, sometimes known as Fawside, Falside, Ffauside, Fauxside, or Fawsyde, is a 14th century Keep located in East Lothian, approximately 2 miles southwest of Tranent, and two miles southeast of Musselburgh. The castle dates to 1189, when the monks of Newbattle Abbey granted land to Saer de Quincy, 1st Earl of Winchester to build the castle on the site. Today the privately held castle still stands and includes a Bed and Breakfast for the weary traveler.

Early Origins of the Fawsit family

The surname Fawsit was first found in East Lothian, at Fawsyde where one of the first records of the name was Aedmundus de Fayeside who witnessed the grant of Tranent church to Holyrood Abbey be Thos filius Swani (c. 1150.) More than a century later, Alan de Fausyde witnessed a grant by Peter de Grame to the Hospital of Soltre before 1238.

Early History of the Fawsit family

During the era when a person's name, tribe and posterity was one of his most important possessions, many different spellings were found in the archives examined. Fawsit occurred in many references, and spelling variations of the name found included Fawcett, Fawsyde, Faucett, Fallcett, Fawcitt, Faucitt, Fawside and many more.

Notable amongst the family name during their early history was Edward Forsett (1553?-1630?), English political writer who obtained from Elizabeth in 1583 a twenty-one years' lease of the manor of Tyburn, Middlesex, at the annual rent of 16l. 11s. 8d. "As a justice of peace he showed himself very active in the examination of those concerned in the Gunpowder plot, and he occasionally took charge of the Tower during the absence of the lieutenant, Sir William Waad. " [1] John Fawcett, born at Bolton-le-Moors, Lancashire, in 1789, was originally a shoemaker, but abandoned that calling to follow the profession of music in...
Another 213 words (15 lines of text) are included under the topic Early Fawsit Notables in all our PDF Extended History products and printed products wherever possible.

Migration of the Fawsit family to Ireland

Some of the Fawsit family moved to Ireland, but this topic is not covered in this excerpt. More information about their life in Ireland is included in all our PDF Extended History products and printed products wherever possible.

Migration of the Fawsit family

Gradually becoming disenchanted with life in Ireland many of these uprooted families sailed aboard the armada of sailing ships known as the "White Sails" which plied the stormy Atlantic. These overcrowded ships often arrived with only 60 to 70% of their original passenger list, many dying of illness and the elements, were buried at sea. In North America, early immigrants bearing the family name Fawsit, or a spelling variation of the surname include: John Fawcett who arrived in Nova Scotia with his wife Jane in 1774. Adam Fawcett had already brought the name to the colonies when he purchased land in Virginia in 1654. By the mid-1800's the Fawcett surname had appeared in Pennsylvania and Louisiana..