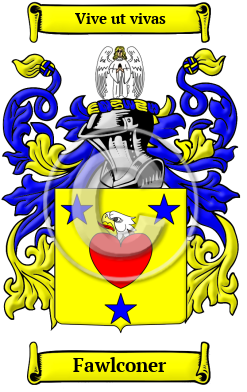 The name Fawlconer was derived from 'falconer,' which in turn, was derived from the Old French word 'faulconnier,' a term of office for one who breeds or trains falcons and hawks for sport. Accordingly, one of the first records of the name was Matheus the falconarius (falconer) who witnessed a charter by Earl Davis c. 1202. [1]

Early Origins of the Fawlconer family

The surname Fawlconer was first found in Angus, where early records revealed Gulielmus Auceps (William the falconer) was granted lands to the kirk (church) of Marington or Maryton c. 1200. "In the vernacular he may have borne the name Hawker, for while his descendants have retained the name Falconer their estate ('villa eiusdem Willelmi Aucipis') was known as Haukertun or Haukerstun." [1]

Early History of the Fawlconer family

Notable amongst the family name during their early history was William Falkner, D.D. (died 1682), an English divine of Glemsford, Suffolk; Colin Falconer (1623-1686), Scottish minister, Bishop of Argyll (1679-1680) Bishop of Moray (1680-1686); John Falconer (Falkner) (1577-1656), an English Jesuit; John Falconer ( fl. 1547), an English merchant; John Falconer (Falconar) (c.1660-1723), a Scottish minister in the Church of Scotland; Sir Alexander Falconer of Glenfarquhar; Sir David Falconer of Glenfarquhar...
Another 70 words (5 lines of text) are included under the topic Early Fawlconer Notables in all our PDF Extended History products and printed products wherever possible.

Migration of the Fawlconer family to Ireland

Some of the Fawlconer family moved to Ireland, but this topic is not covered in this excerpt.
Another 79 words (6 lines of text) about their life in Ireland is included in all our PDF Extended History products and printed products wherever possible.

Migration of the Fawlconer family

Gradually becoming disenchanted with life in Ireland many of these uprooted families sailed aboard the armada of sailing ships known as the "White Sails" which plied the stormy Atlantic. These overcrowded ships often arrived with only 60 to 70% of their original passenger list, many dying of cholera, typhoid, dysentery or small pox. In North America, some of the first immigrants who could be considered kinsmen of the Fawlconer family name Fawlconer, or who bore a variation of the surname were Thomas, Robert, John, James, Alexander, Patrick, and Samuel Faulkner, all settled in Philadelphia, Pennsylvania between 1754 and 1878; Thomas Faulkner settled in Virginia in 1663.