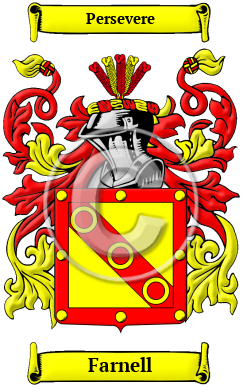 The Anglo-Saxon name Farnell comes from the family having resided by a fern-covered hill. The name is both a surname and a place-name, and is derived from the Old English elements fearn, for fern, and hyll, the word for hill. [1] Alternatively, another source notes that the surname denotes a "dweller at the Fern Slope or Corner [Old English fearn + heal(h)] for Farnhill." [2]

Early Origins of the Farnell family

The surname Farnell was first found in East Cheshire at Fernhill, or at Farnhill in West Riding of Yorkshire or at Farnell Wood in Kent. Some of the first records of the name include: Richard de Farenhull in 1214; William de Fernhulle in 1263 and Hugh de la Fernhull in 1275; John de Farnhull, listed in the Hundredorum Rolls of 1273; and William atte Farnhulle in 1298. [1]

In Scotland, the name was derived from "the lands of Famell in Angus. Between 1214 and 1246 Duncan de Ferneuel witnessed charters by Malcolm, earl of Angus, and a charter of land in the territory of Kerimor to Arbroath Abbey. Meg Fernwale is recorded in Aberdeen, 1408." [3]

Early History of the Farnell family

This web page shows only a small excerpt of our Farnell research. Another 116 words (8 lines of text) covering the years 1200, 1379 and 1246 are included under the topic Early Farnell History in all our PDF Extended History products and printed products wherever possible.

Farnell has been spelled many different ways. Before English spelling became standardized over the last few hundred years, spelling variations in names were a common occurrence. As the English language changed in the Middle Ages, absorbing pieces of Latin and French, as well as other languages, the spelling of people's names also changed considerably, even over a single lifetime. Spelling variants included: Farnell, Farnel, Farnall, Farnyll, Farnill and many more.

More information is included under the topic Early Farnell Notables in all our PDF Extended History products and printed products wherever possible.

Farnell migration to the United States +

In an attempt to escape the chaos experienced in England, many English families boarded overcrowded and diseased ships sailing for the shores of North America and other British colonies. Those families hardy enough, and lucky enough, to make the passage intact were rewarded with land and a social environment less prone to religious and political persecution. Many of these families became important contributors to the young colonies in which they settled. Early immigration and passenger lists have documented some of the first Farnells to arrive on North American shores:

Farnell Settlers in United States in the 17th Century

Farnell Settlers in New Zealand in the 19th Century