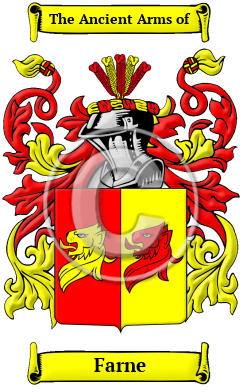 Today's generation of the Farne family inherits a name that was first used by the Scottish tribe known as the Picts. The first family to use the name Farne lived on the land of Fearn in Ross where "the Gaelic name of this parish, Fearnn, signifies 'the alder-tree,' and was applied in consequence of the great number of alders growing at Mid-Fearn, in the parish of Edderton, in the neighbourhood. An abbey was founded there in the reign of Alexander II., by Farquhar, first Earl of Ross." [1]

Early Origins of the Farne family

The surname Farne was first found in Ross-shire (Gaelic: Siorrachd Rois) a former county, now part of the Council Areas of Highland and Western Isles in Northern Scotland, which emerged from the Gaelic lordship of the Earl of Ross.

Saint Bartholomew of Farne (d. 1193) was a Benedictine hermit, born Tostig, to parents of Scandinavian origin, in Whitby, Northumbria, England. He received a vision of St Cuthbert, and then decided to inhabit Cuthbert's old cell on the island of Farne. There he remained for the remaining 42 years of his life.

Early History of the Farne family

Repeated and inaccurate translation of Scottish names from Gaelic to English and back resulted in a wide variety of spelling variations with single names. Farne has appeared Ferns, Fearn, Fearns, Fearne, Fern, Ferne and others.

Notable amongst the Clan at this time was Sir John Ferne (ca. 1560-1609), an English writer on heraldry and an eminent lawyer and politician, Member of Parliament for Boroughbridge from 1604 to 1609. He was "the son of William Ferne of Temple Belwood in the isle of Axholme, Lincolnshire, who came originally from Doncaster, Yorkshire." [3] Henry Ferne (1602-1662), was an English bishop, Chaplain Extraordinary to Charles I...
Another 67 words (5 lines of text) are included under the topic Early Farne Notables in all our PDF Extended History products and printed products wherever possible.

Farne migration to the United States +

Many Scottish families suffered enormous hardships and were compelled to leave their country of birth. They traveled to Ireland and Australia, but mostly to the colonies of North America, where many found the freedom and opportunity they sought. It was not without a fight, though, as many were forced to stand up and defend their freedom in the American War of Independence. The ancestors of these Scots abroad have rediscovered their heritage in the last century through the Clan societies and other organizations that have sprung up across North America. Immigration and passenger ship lists show some important early immigrants bearing the name Farne:

Farne Settlers in United States in the 17th Century

Farne Settlers in United States in the 18th Century