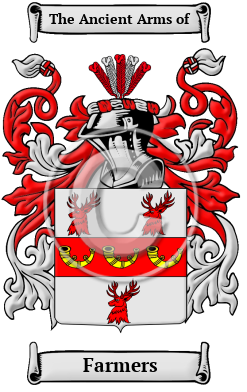 Farmers is a name of ancient Norman origin. It arrived in England with the Norman Conquest of 1066. It is a name for a tax farmer. A tax farmer was one who undertook the collection of taxes, tariffs, and such for a fixed sum. [1] The name only refers secondarily to its more literal and obvious connotations of one who worked as a farmer in the modern sense of the word, managing an area of land and growing produce and livestock.

Early Origins of the Farmers family

The surname Farmers was first found in various counties and shires throughout ancient Britain. To confuse matters, early rolls added the occupation to some entries, thus making research difficult. By example, one of the earliest records was: Robertus Friston, farmer de Parsonage in 1372. The Yorkshire Poll Tax Rolls of 1379 had numerous such entries: Ricardus de Wenteworth, firmarius unius Grauuge; Johannes del Grange, fermour del Grange; and so on. [3]

Early History of the Farmers family

Anglo-Norman names are characterized by a multitude of spelling variations. When the Normans became the ruling people of England in the 11th century, they introduced a new language into a society where the main languages of Old and later Middle English had no definite spelling rules. These languages were more often spoken than written, so they blended freely with one another. Contributing to this mixing of tongues was the fact that medieval scribes spelled words according to sound, ensuring that a person's name would appear differently in nearly every document in which it was recorded. The name has been spelled Farmer, Farmere, Farmers, Fermare and others.

Outstanding amongst the family at this time was Sir John Fermor of Easton Neston, Northampton, who was ennobled in 1553, in the presence of Queen Mary. His son, Sir George Farmer, was made a Knight in 1586 in the reign of Queen Elizabeth I. Richard Fermor (1480-1551), was an English wool merchant; and his grandson Sir Hatton Fermor, inherited the estates at Easton Neston, Northamptonshire. His son, Sir William Fermor, 1st Baronet (1623?-1661), was an English officer in the Royalist army during the English Civil...
Another 85 words (6 lines of text) are included under the topic Early Farmers Notables in all our PDF Extended History products and printed products wherever possible.

Migration of the Farmers family to Ireland

Some of the Farmers family moved to Ireland, but this topic is not covered in this excerpt.
Another 54 words (4 lines of text) about their life in Ireland is included in all our PDF Extended History products and printed products wherever possible.

Migration of the Farmers family

For many English families, the political and religious disarray that plagued their homeland made the frontiers of the New World an attractive prospect. Thousands migrated, aboard cramped disease-ridden ships. They arrived sick, poor, and hungry, but were welcomed in many cases with far greater opportunity than at home in England. Many of these hardy settlers went on to make important contributions to the emerging nations in which they landed. Among early immigrants bearing the name Farmers or a variant listed above were: Charles Farmer, who arrived in Virginia in 1623; Alice Farmer, who arrived in Virginia in 1662; Row Farmar, who came to Virginia in 1677; Berrebe Farmer, who was on record in Virginia in 1692.