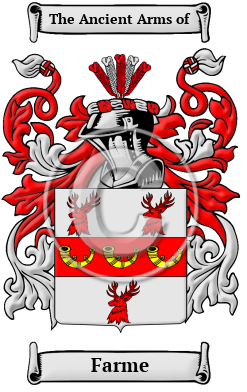 The name Farme reached English shores for the first time with the ancestors of the Farme family as they migrated following the Norman Conquest in 1066. Farme is a name for a tax farmer. A tax farmer was one who undertook the collection of taxes, tariffs, and such for a fixed sum. [1] The name only refers secondarily to its more literal and obvious connotations of one who worked as a farmer in the modern sense of the word, managing an area of land and growing produce and livestock.

Early Origins of the Farme family

The surname Farme was first found in various counties and shires throughout ancient Britain. To confuse matters, early rolls added the occupation to some entries, thus making research difficult. By example, one of the earliest records was: Robertus Friston, farmer de Parsonage in 1372. The Yorkshire Poll Tax Rolls of 1379 had numerous such entries: Ricardus de Wenteworth, firmarius unius Grauuge; Johannes del Grange, fermour del Grange; and so on. [3]

Early History of the Farme family

It is only in the last few hundred years that the English language has been standardized. For that reason, Anglo-Norman surnames like Farme are characterized by many spelling variations. Scribes and monks in the Middle Ages spelled names they sounded, so it is common to find several variations that refer to a single person. As the English language changed and incorporated elements of other European languages such as Norman French and Latin, even literate people regularly changed the spelling of their names. The variations of the name Farme include Farmer, Farmere, Farmers, Fermare and others.

Outstanding amongst the family at this time was Sir John Fermor of Easton Neston, Northampton, who was ennobled in 1553, in the presence of Queen Mary. His son, Sir George Farmer, was made a Knight in 1586 in the reign of Queen Elizabeth I. Richard Fermor (1480-1551), was an English wool merchant; and his grandson Sir Hatton Fermor, inherited the estates at Easton Neston, Northamptonshire. His son, Sir William Fermor, 1st Baronet (1623?-1661), was an English officer in the Royalist army during the English Civil...
Another 85 words (6 lines of text) are included under the topic Early Farme Notables in all our PDF Extended History products and printed products wherever possible.

Migration of the Farme family to Ireland

Some of the Farme family moved to Ireland, but this topic is not covered in this excerpt.
Another 54 words (4 lines of text) about their life in Ireland is included in all our PDF Extended History products and printed products wherever possible.

Farme migration to the United States +

Faced with the chaos present in England at that time, many English families looked towards the open frontiers of the New World with its opportunities to escape oppression and starvation. People migrated to North America, as well as Australia and Ireland in droves, paying exorbitant rates for passages in cramped, unsafe ships. Many of the settlers did not make the long passage alive, but those who did see the shores of North America were welcomed with great opportunity. Many of the families that came from England went on to make essential contributions to the emerging nations of Canada and the United States. Some of the first immigrants to cross the Atlantic and come to North America carried the name Farme, or a variant listed above:

Farme Settlers in United States in the 17th Century

Farme Settlers in United States in the 18th Century