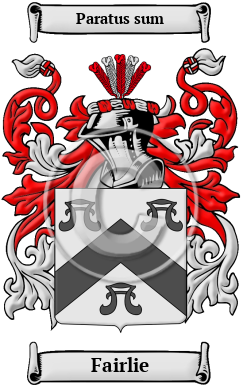 Early Origins of the Fairlie family

The surname Fairlie was first found in North Ayrshire at Fairlie, a village on the eastern shore of the Firth of Clyde and looks across to the Isle of Arran and the Cumbraes.

The Norman knight Sir Richard de Morville was appointed by King David I of Scotland (1084-1153) to hold land in Scotland. He became High Constable of Scotland and Lord of Cunninghame, Largs and Lauderdale. This land was later subdivided and by the 13th century, the land of Fairlie was held by the de Ros (or Ross) family of Tarbert.

One of the sons of the Ross family who built the Castle and adopted the name Fairlie. Fairlie Castle which survived until the 1840s is now in ruins. It lies in Fairlie Glen near the town of Fairlie in the old Barony of Fairlie, Parish of Largs, North Ayrshire. One source claims that Sir Robert Fairlie of that Ilk built the present castle in 1521. By design, it was a tower castle without a motte or a bailey and had four storeys. The walls were about 1.6m (5.25 feet) thick.

"Of Fairlie Castle, a strong square building, said to have belonged to Hardicanute, the walls are still entire; and near it, but in West Kilbride parish, are remains of an ancient chapel round which are some fine old trees." [1]

One of the first records of the name was William de Fairlie who was granted a pardon by Edward III at Berwick in 1335 "for all the crimes committed by him in the war with England." [2]

Another author states "It is rather remarkable that so few notices of this family are to be found, and that such as exist are of such a disconnected and fragmentary nature."

Alternatively, the name could have originated in England. Farleigh-Hungerford is a parish, in the union of Frome, hundred of Wellow, E. division of Somerset and East Fairleigh is a parish, in the union and hundred of Maidstone, lathe of Aylesford, W. division of Kent. West Fairleigh can be found nearby. [1] The Hundredorum Rolls of 1273 list Hugh de Farleye as living there at that time. [3]

As far as the meaning of the name: "one who came from Fairlee (beautiful glade), in Wight, or from Fairley (fern clearing), in Shropshire." [4]

Early History of the Fairlie family

This web page shows only a small excerpt of our Fairlie research. Another 195 words (14 lines of text) covering the years 1274, 1329, 1342 and 1335 are included under the topic Early Fairlie History in all our PDF Extended History products and printed products wherever possible.

More information is included under the topic Early Fairlie Notables in all our PDF Extended History products and printed products wherever possible.

Fairlie migration to the United States +

Gradually becoming disenchanted with life in Ireland many of these uprooted families sailed aboard the armada of sailing ships known as the "White Sails" which plied the stormy Atlantic. These overcrowded ships often arrived with only 60 to 70% of their original passenger list, many dying of illness and the elements, were buried at sea. In North America, early immigrants bearing the family name Fairlie, or a spelling variation of the surname include:

Fairlie Settlers in United States in the 18th Century

Fairlie Settlers in Canada in the 19th Century

Fairlie Settlers in Australia in the 19th Century

Fairlie Settlers in New Zealand in the 19th Century

Historic Events for the Fairlie family +