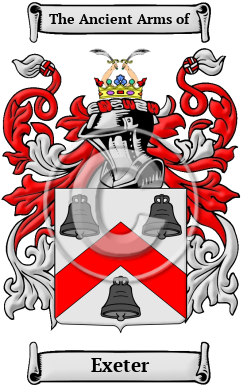 The Anglo-Saxon name Exeter comes from when the family resided in Exeter, a town in Devon. The town of Exeter has been around for a very long time; it was first listed in Roman records as Iska c. 150. Documents dated around AD 900 call it Exanceaster. In the Domesday Book (1086), it was called Execestre. The place-name is derived from the Celtic word exe, which means water, and the Old English word ceaster, which meant Roman fort. The Romans first invaded the British Isles in AD 44, landing at Thanet and soon subduing all of the English tribes. They remained in control for two or three centuries, leaving an indelible mark upon the face of England. Town names like Bath are directly attributable to the period of Roman occupation, and it was uncommon but not rare for someone to stumble over remains of the Roman occupation in medieval England.

Early Origins of the Exeter family

The surname Exeter was first found in Devon, at the historic city of Exeter, the home of Rougemont Castle who many believe was ordered to be built by William the Conqueror after the city led a revolt of his authority in 1068. After 18 days of siege, this city finally surrendered and sore an oath not to harm the city or increase its ancient tribute.

Joseph of Exeter in Latin Joseph Iscanus (fl. 1190), "was a mediæval Latin poet, was, as he tells us himself, a native of Exeter, being the fellow-townsman and lifelong friend of Baldwin, Archbishop of Canterbury." [1]

Stephen of Exeter (fl. 1265), is the supposed author of the ‘Annales Domus Montis Fernandi ab anno XLV usque ad annum MCCLXXIV.’ " which is contained in a manuscript in the archiepiscopal library at Armagh. He was apparently born in 1246, and entered the Franciscan order at Multyfarnham, Westmeath, in 1263. Other accounts connect him with Strade in Mayo, where there was a house of the Franciscan order, which Jordan of Exeter, lord of Athlethan, or his son Stephen gave to the Dominicans in 1252." [1] And Walter of Exeter (fl. 1301), was a Cluniac monk, and a citizen of Exeter.

Early History of the Exeter family

This web page shows only a small excerpt of our Exeter research. Another 53 words (4 lines of text) covering the years 119 and 1190 are included under the topic Early Exeter History in all our PDF Extended History products and printed products wherever possible.

The English language only became standardized in the last few centuries; therefore,spelling variations are common among early Anglo-Saxon names. As the form of the English language changed, even the spelling of literate people's names evolved. Exeter has been recorded under many different variations, including Hexter, Hexeter, Exeter, Exter and others.

More information is included under the topic Early Exeter Notables in all our PDF Extended History products and printed products wherever possible.

Exeter migration to the United States +

For many English families, the political and religious disarray that shrouded England made the far away New World an attractive prospect. On cramped disease-ridden ships, thousands migrated to those British colonies that would eventually become Canada and the United States. Those hardy settlers that survived the journey often went on to make important contributions to the emerging nations in which they landed. Analysis of immigration records indicates that some of the first North American immigrants bore the name Exeter or a variant listed above:

Exeter Settlers in United States in the 18th Century

Exeter Settlers in Australia in the 19th Century

Exeter Settlers in New Zealand in the 19th Century

Historic Events for the Exeter family +