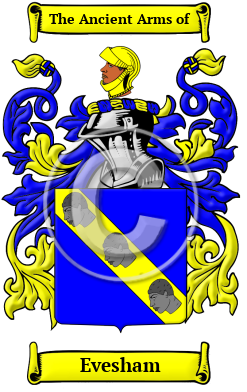 Early Origins of the Evesham family

The surname Evesham was first found in Herefordshire at Evesham, a market town and a civil parish in the Local Authority District of Wychavon, historically at the head of a union, locally in the Lower division of the hundred of Blackenhurst.

"This place was originally called Homme or Haum, from the Saxon holm, a word particularly appropriate to the peninsular form of its site. The appellation Eovesholme, or Eovesham, is said to be derived from Eoves, a swineherd in the service of Egwin, third bishop of Wessex, a Saxon province and bishopric, part of which now forms the diocese of Worcester. Eoves is said to have had an interview with the Virgin Mary on the spot, and to this circumstance is attributed the erection of an abbey for Benedictine monks, the foundation of which was laid in 701, and the building completed in 709, when the charter was confirmed: it was consecrated in 714, and dedicated to the Virgin Mary, by Bishop Wilfrid, the successor of Egwin, who had retired hither after resigning the bishopric of Worcester to the pope. The convent received large grants of land from the Anglo-Saxon kings and nobility, as well as from other benefactors both before and after the Conquest; its possessions were ample, and its privileges numerous: the abbots sat in parliament as spiritual barons." [1]

Evesham Abbey, generally understood to be the third largest in England, was founded by Saint Egwin, the third Bishop of Worcester, in around 701 AD. The Domesday Book of 1086 lists the place name as Evesham. [2]

The Battle of Evesham was one of the two main battles of 13th century England's Second Barons' War. One of the first records of the surname was found in 1221 when Celestria of Eversham held lands in this area. Heversham is a small village and civil parish in the South Lakeland district of Cumbria that dates back to c. 1050, when it was first listed as Hefresham. By the time of the Domesday Book, it was listed as Eureshaim. [3]

Cardinal Hugh of Evesham (d. 1287) "is called Atratus by Latin writers, and Il Naro and Lenoir by the Italian and French. It is possible that this is a translation of the English name Black, but there is no evidence in support of the conjecture, his name never occurring in an English form. He was born at Evesham, educated at both the English universities, and completed his studies in France and Italy. " [4]

Walter of Evesham ( fl. 1320), was a Benedictine writer and a monk of Evesham Abbey.

Early History of the Evesham family

This web page shows only a small excerpt of our Evesham research. Another 137 words (10 lines of text) covering the years 1373, 1455, 1487, 1510, 1600 and 1140 are included under the topic Early Evesham History in all our PDF Extended History products and printed products wherever possible.

More information is included under the topic Early Evesham Notables in all our PDF Extended History products and printed products wherever possible.

Migration of the Evesham family