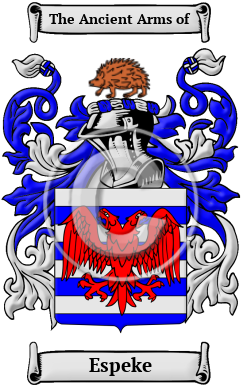 Espeke is one of the many new names that came to England following the Norman Conquest of 1066. The name Espeke comes from the Norman given name Espec.

Early Origins of the Espeke family

The surname Espeke was first found in Lancashire where a Norman noble Le Espec was an under tenant of Roger de Poitou, and was granted the lands of Speke outside Liverpool in Lancashire. Soon after the taking of the Domesday Book in 1086, a descendant, Richard Le Espec acquired the manors of Wenworthy and Brampton Speke in the county of Devon, [1] which he held from Robert Fitzroy of Oakhampton. His descendent, William Le Espec married and acquired the estates of Gervois.

Walter Espec (d. 1153), was founder of Rievaulx Abbey, Yorkshire, and was probably the son of William Spech, who in 1085 held Warden, Bedfordshire, where some fifty years later Walter Espec founded and endowed an Abbey. "Espec's chief property was in Yorkshire, and he resided at Helmsley. Under Henry I he was Justice of the Forests and Itinerant Justice in the northern counties. Under Stephen he actively resisted the Scotch invasion. On 10 Jan. 1138 FitzDuncan failed in a night attack on Espec's castle of Wark. Then King David and his son Henry came up and formed a regular siege for three weeks, after which the main body passed on to Harry Northumberland. Three months later (c. 8 May) the garrison swooped down upon the Scotch king's commissariat, and had to submit to a second siege. The castle was stoutly defended by Walter's nephew, John de Bussey, but had to surrender about 11 Nov. " [2]

Early History of the Espeke family

It is only in the last few hundred years that the English language has been standardized. For that reason, Anglo-Norman surnames like Espeke are characterized by many spelling variations. Scribes and monks in the Middle Ages spelled names they sounded, so it is common to find several variations that refer to a single person. As the English language changed and incorporated elements of other European languages such as Norman French and Latin, even literate people regularly changed the spelling of their names. The variations of the name Espeke include Speak, Speck, Speake, Speke and others.

Outstanding amongst the family at this time was Sir John Speke of Whitelackington; and Sir Hugh Speke, 1st Baronet of Hasilbury, Wiltshire (died 1661), an English politician who sat...
Another 28 words (2 lines of text) are included under the topic Early Espeke Notables in all our PDF Extended History products and printed products wherever possible.

Migration of the Espeke family

Faced with the chaos present in England at that time, many English families looked towards the open frontiers of the New World with its opportunities to escape oppression and starvation. People migrated to North America, as well as Australia and Ireland in droves, paying exorbitant rates for passages in cramped, unsafe ships. Many of the settlers did not make the long passage alive, but those who did see the shores of North America were welcomed with great opportunity. Many of the families that came from England went on to make essential contributions to the emerging nations of Canada and the United States. Some of the first immigrants to cross the Atlantic and come to North America carried the name Espeke, or a variant listed above: George Speke who arrived in Philadelphia, Pennsylvania in 1854; Anne Speake settled in Barbados in 1654; Henry and James Speak arrived in Philadelphia in 1845..