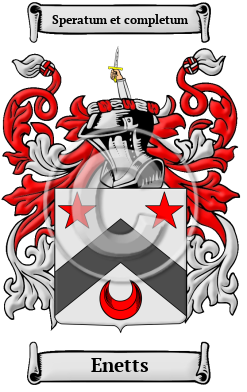 The ancient Pictish-Scottish family that first used the name Enetts lived in the lands of Arnott in the parish of Portmoak in Kinross (now part of the region of Tayside), where one of the first times the name was listed was in 1150 when Michael de Arnoth was mentioned.

Early Origins of the Enetts family

The surname Enetts was first found in the lands of Arnott in the parish of Portmoak, Kinross-shire. The first chief, recorded, Michael Arnott, held those lands about 1150. David, of Fifeshire, his successor was recorded in 1296 when he paid homage to King Edward 1st of England.

Early History of the Enetts family

The arts of spelling and translation were yet in their infancies when surnames began, so there are an enormous number of spelling variations of the names in early Scottish records. This is a particular problem with Scottish names because of the numerous times a name might have been loosely translated to English from Gaelic and back. Enetts has been spelled Arnott, Arnot, Arnatt, Arnocht, Arnote, Arnett, Anetts, Arnette, Ernot, Ernott, Annett, Annetts and many more.

Notable amongst the Clan at this time was David Arnot, C.R.S.A., ( fl. 1497- c. 1536), Scottish canon regular and bishop from Arnot, Fife, Rector of Kirkforthar, Fife in 1497, Archdeacon of Lothian in 1498; Sir Michael Arnot, 1st Baronet (d. c. 1680) of Arnot in the County of Fife; and his son, Charles Arnot (d. before 1652) represented Kinross in the Scottish Parliament. Further to the south in England, Peter Annet (1693-1769)...
Another 70 words (5 lines of text) are included under the topic Early Enetts Notables in all our PDF Extended History products and printed products wherever possible.

Migration of the Enetts family to Ireland

Some of the Enetts family moved to Ireland, but this topic is not covered in this excerpt.
Another 88 words (6 lines of text) about their life in Ireland is included in all our PDF Extended History products and printed products wherever possible.

Migration of the Enetts family

This oppression forced many Scots to leave their homelands. Most of these chose North America as their destination. Although the journey left many sick and poor, these immigrants were welcomed the hardy with great opportunity. Many of these settlers stood up for their newfound freedom in the American War of Independence. More recently, Scots abroad have recovered much of their collective heritage through highland games and other patriotic functions and groups. An examination of passenger and immigration lists has located various settlers bearing the name Enetts: David Arnott, aged 20, who settled in Virginia in 1716; John Arnott, who settled in Virginia in 1795; as well as Agnes, George, Jane, Samuel and William Arnot of one family, who settled in Charles Town, South Carolina in 1767. In Newfoundland, James Arnott settled in St. John's in 1812.