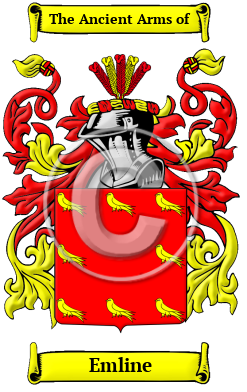 The history of the name Emline begins with the Anglo-Saxon tribes of Britain. It is derived from the name of an ancestor as in the 'son of Emelin,' popularly Emlin and (with intrusive b) Emblin. Emblem is an imitative corruption. [1]

Early Origins of the Emline family

The surname Emline was first found in Dorset where the first on record was found in the Domesday Book of 1086. It was there that we found Anschitil filius Ameline. [2] Over a century later, Godefridus filius Emeline was listed in Winton, Hampshire in 1115. A few years later, John Emelin was listed in Suffolk in 1208 and later again, Geoffrey Amelyn was listed in the Subsidy Rolls for Sussex in 1296. [3]

Early History of the Emline family

The English language only became standardized in the last few centuries; therefore, spelling variations are common among early Anglo-Saxon names. As the form of the English language changed, even the spelling of literate people's names evolved. Emline has been recorded under many different variations, including Emblem, Emblin, Embling, Emlyn, Amblin, Amlin, Emeline, Emline, Emley, Emlam and many more.

Distinguished members of the family include Thomas Emlyn (1663-1741), first Unitarian minister in England, born at Stamford, Lincolnshire, 27 May 1663. "The register of St. Michael's, Stamford, has the entry 'June 11th, Thomas, son of Silvester Embling and Mildred his wife baptzd.' The family surname, which is spelled in thirteen different ways, is said to come from the tything of Embley, in the parish of East Wellow, Hampshire; but the Embleys or...
Another 71 words (5 lines of text) are included under the topic Early Emline Notables in all our PDF Extended History products and printed products wherever possible.

Migration of the Emline family

For many English families, the political and religious disarray that shrouded England made the far away New World an attractive prospect. On cramped disease-ridden ships, thousands migrated to those British colonies that would eventually become Canada and the United States. Those hardy settlers that survived the journey often went on to make important contributions to the emerging nations in which they landed. Analysis of immigration records indicates that some of the first North American immigrants bore the name Emline or a variant listed above: the name represented in many forms and recorded from the mid 17th century in the great migration from Europe. Migrants settled in the eastern seaboard from Newfoundland, to Maine, to Virginia, the Carolinas, and to the islands..