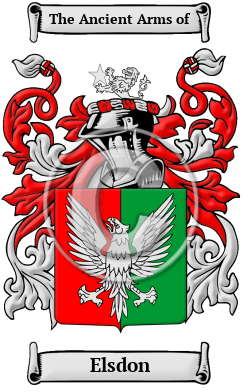 The ancestors of the name Elsdon date back to the Anglo-Saxon tribes of Britain. The name is derived from when the Elsdon family lived in Nottinghamshire or Wiltshire. The name could also be classified as a baptismal name as in the son of Elstan and an earlier personal name Dunstan.

Early Origins of the Elsdon family

The surname Elsdon was first found in Nottinghamshire at Elston, a small village that lies between the rivers Trent and Devon and dates back to at least the Domesday Book where it was listed as Elvestune, Eluestune and Eluestune [1] and probably meant "farmstead of a man called Eilafr" from an Old Scandinavian personal name + tun. [2]

Early History of the Elsdon family

It is only in the last few hundred years that the English language has been standardized. For that reason, early Anglo-Saxon surnames like Elsdon are characterized by many spelling variations. As the English language changed and incorporated elements of other European languages, even literate people changed the spelling of their names. The variations of the name Elsdon include: Elston, Elstone, Elliston, Elsden, Elsdon, Elson and others.

Elsdon Settlers in New Zealand in the 19th Century