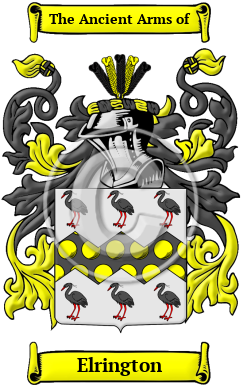 Early Origins of the Elrington family

The surname Elrington was first found in Northumberland at Elrington, a hamlet Cambridgeshire with Elrington Wood and Elrington Burn nearby. [1] However, we must look to Cambridgeshire to find the first record of the family. For it is there that in 1474, John Elrynton held taxable estates at that time. [1]

Early History of the Elrington family

Distinguished members of the family include Thomas Elrington or Elderton (?1520-1566), an English politician, Member of the Parliament for New Shoreham in October 1553 and Bramber in November 1554; and Thomas Elrington (1688-1732), an English actor, born in London who frequented Ireland and London frequently...
Another 45 words (3 lines of text) are included under the topic Early Elrington Notables in all our PDF Extended History products and printed products wherever possible.

Elrington Settlers in Australia in the 19th Century