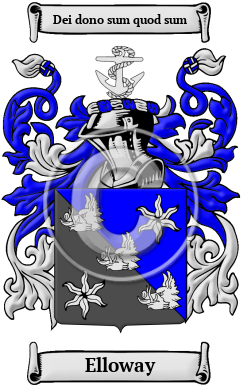 The annals of Scottish history reveal that Elloway was first used as a name by descendants of the Pictish tribe of ancient Scotland. The Elloway family lived in Aberdeen but originally from Clackmannan. The name may be derived from the Gaelic alla which means wild and mhagh which means field.

Early Origins of the Elloway family

The surname Elloway was first found in the county of Clackmannanshire (Gaelic: Siorrachd Chlach Mhannainn), nicknamed the “wee county,” it is the smallest Council Area of Scotland, located in southeastern Scotland. According to Black, the most likely source of their origin was Alloa in the Aberdeen area. [1] The first recorded spelling of the name was Alleway, about the year 1359. Alloway is a former Scottish village that is now a suburb of Ayr, best known as the birthplace of Robert Burns and the setting for his poem "Tam o' Shanter." In North America, the word Alloway is a Delaware Indian term meaning "beautiful tail" and refers to the black fox.

Early History of the Elloway family

This web page shows only a small excerpt of our Elloway research. Another 98 words (7 lines of text) covering the years 1440 and 1772 are included under the topic Early Elloway History in all our PDF Extended History products and printed products wherever possible.

During the Middle Ages, there was no basic set of rules and scribes wrote according to sound. The correct spelling of Scottish names were further compromised after many haphazard translations from Gaelic to English and back. Spelling variations of the name Elloway include Alloway, Alleway, Aloveious, Alloweious, Allaway, Alliway, Alloway, Aloway, Alaway, Aleway, Alewy, Alloways, Allawy, Aylwey and many more.

More information is included under the topic Early Elloway Notables in all our PDF Extended History products and printed products wherever possible.

Migration of the Elloway family to Ireland

Some of the Elloway family moved to Ireland, but this topic is not covered in this excerpt.
Another 32 words (2 lines of text) about their life in Ireland is included in all our PDF Extended History products and printed products wherever possible.

Migration of the Elloway family

Scots left their country by the thousands to travel to Australia and North America. Desperate for freedom and an opportunity to fend for themselves, many paid huge fees and suffered under terrible conditions on long voyages. Still, for those who made the trip, freedom and opportunity awaited. In North America, many fought their old English oppressors in the American War of Independence. In recent years, Scottish heritage has been an increasingly important topic, as Clan societies and other organizations have renewed people's interest in their history. An examination of passenger and immigration lists shows many early settlers bearing the name of Elloway: William Alloway who settled in Pennsylvania in 1682; but John Alloway had settled in Virginia twenty years before. Mary Alloway arrived in 1770; and Samuel Alloway arrived in New Orleans in 1823..

Motto: Dei dono sum quod sum
Motto Translation: By the bounty of God I am what I am.