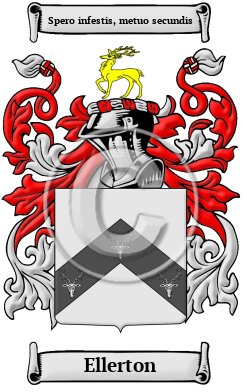 The ancestors of the bearers of the Ellerton family name are thought have lived in ancient Anglo-Saxon England. They were first found in Yorkshire where we find Ellerton Abbey in the North Riding, Ellerton Priory in the East Riding and Ellerton upon Swale in the North Riding. Ellerton Abbey was the home of a small priory of Cistercian nuns, thought to have been founded by Warnerius, dapifer to the Earl of Richmond, in the time of Henry II., and Ellerton Priory is home to a church, which in a dilapidated state, is part of the nave of the ancient structure, which joined a priory built by William Fitz-Piers, before 1212, for canons of the Semperingham order. Ellerton upon Swale was the property of the Earl of Tyrconnel, and home to Henry Jenkins, who lived to the extraordinary age of 169 years, born and died there on the 8th of December, 1670. [1]

All three places collectively date back to the Domesday Book of 1086 when they were known as Elreton [2] and literally meant "farmstead by the alders." [3]

Early Origins of the Ellerton family

The surname Ellerton was first found in Yorkshire where the first record was that of Ralph de Elreton in the Assize Rolls for 1204. Roger de Ethelartone was found in Staffordshire in 1307. [4]

(Prior) de Ellerton was listed in the Hundredorum Rolls of 1273 and later in the Yorkshire Poll Tax Rolls of 1379, Agnes de Ellerton; and Johannes de Ellyrton were both listed as holding lands at that time. [5]

John de Ellerton, tannour, was a Freeman of York, 28 Edward I (in the twenty-eighth year of King Edward I's reign.)

Early History of the Ellerton family

Until quite recently, the English language has lacked a definite system of spelling rules. Consequently, Anglo-Saxon surnames are characterized by a multitude of spelling variations. Changes in Anglo-Saxon names were influenced by the evolution of the English language, as it incorporated elements of French, Latin, and other languages. Although Medieval scribes and church officials recorded names as they sounded, so it is common to find one person referred to by several different spellings of his surname, even the most literate people varied the spelling of their own names. Variations of the name Ellerton include Ellerton, Elerton and others.

Notables of the family at this time include Edward Ellerton, founder of scholarships, son of Richard Ellerton of Downholm, Yorkshire, was born in 1770; was educated at Richmond School: matriculated at Oxford as a member of University College; and graduated B.A, in 1792, and M.A. in 1795. Ellerton was appointed master of Magdalen College school in 1799; was afterwards elected fellow of the same college, and proceeded B.D. in 1805, and D.D. in 1815. He was appointed to the perpetual curacy of Horspath, Oxfordshire, in 1814, and to the perpetual curacy of Sevenhampton, Gloucestershire, in 1825, resigning the latter charge early...
Another 212 words (15 lines of text) are included under the topic Early Ellerton Notables in all our PDF Extended History products and printed products wherever possible.

Ellerton Settlers in Australia in the 19th Century

Ellerton Settlers in West Indies in the 17th Century