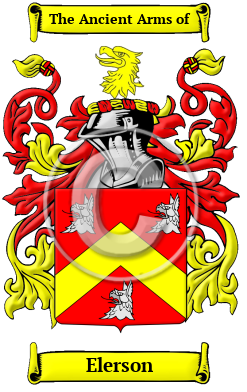 Early Origins of the Elerson family

The surname Elerson was first found in Durham where the "surname is derived from the name of an ancestor. 'the son of Ellis'; Old English Elis or Elys (Elias). Ellison may originate from the English form-thus Elis, Elis-son; or from the Old French form, thus Elie, Elie-son. This name was wonderfully popularized throughout Western Europe by the Crusaders." [1]

Further to the north in Scotland, Rogier Elyssone of Berwickshire was the first recorded. He rendered homage to King Edward I of England in 1296. Later, William Elysson, Scots prisoner of war was released from Newgate prison in 1375 and John Elison had safe conduct into England in 1424. [2]

Early History of the Elerson family

Although the name, Elerson, appeared in many references, from time to time, the surname was shown with the spellings Ellison, Ellerson, Elleson, Elyson, Elison and many more.

Notable amongst the family name during their early history was Robert Ellison (1614-1678), an English politician who sat in the House of Commons at various times between 1647 and...
Another 29 words (2 lines of text) are included under the topic Early Elerson Notables in all our PDF Extended History products and printed products wherever possible.

Migration of the Elerson family to Ireland

Some of the Elerson family moved to Ireland, but this topic is not covered in this excerpt.
Another 59 words (4 lines of text) about their life in Ireland is included in all our PDF Extended History products and printed products wherever possible.

Migration of the Elerson family

Gradually becoming disenchanted with life in Ireland many of these uprooted families sailed aboard the armada of sailing ships known as the "White Sails" which plied the stormy Atlantic. These overcrowded ships often arrived with only 60 to 70% of their original passenger list, many dying of cholera, typhoid, dysentery or small pox. In North America, some of the first immigrants who could be considered kinsmen of the Elerson family name Elerson, or who bore a variation of the surname were John and Ellin Ellison, who arrived in Virginia in 1623; George Ellison who settled in Virginia in 1624; James Ellison, who arrived in Boston in 1644.