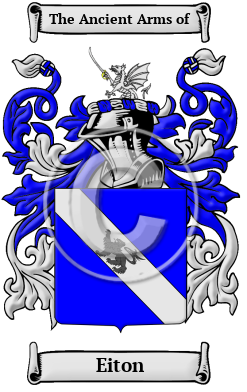 Early Origins of the Eiton family

The surname Eiton was first found in Shropshire at Eyton where "this family can lay claim to great antiquity, being certainly resident at Eyton on the Weald Moors as early as the reigns of Henry I. and II. They were in some way connected with the Pantulfs, Barons of Wem, who were Lords of Eyton at the period of the Domesday Survey." [1]

Today Eyton is known as Eyton upon the Weald Moors and dates back to the aforementioned Domesday Book of 1086 where it was originally listed as Etone. By 1344, the local was known as "Eyton super le Wildmore" and literally meant "farmstead on dry ground in marsh, or on well-watered land," from the Old English words "eg" + "tun." The affix means "in the wild moorland," from the Old English "wilde" + "mor." [2]

Stephen Eyton or Edon ( fl. 1320?), was an early English chronicler, "a canon of the Augustinian priory of Warter, near Pocklington in the East Riding of Yorkshire, and possibly took his name from the neighbouring village of Etton." [3]

Early History of the Eiton family

Another 28 words (2 lines of text) are included under the topic Early Eiton Notables in all our PDF Extended History products and printed products wherever possible.

Migration of the Eiton family to Ireland

Some of the Eiton family moved to Ireland, but this topic is not covered in this excerpt.
Another 79 words (6 lines of text) about their life in Ireland is included in all our PDF Extended History products and printed products wherever possible.

Migration of the Eiton family