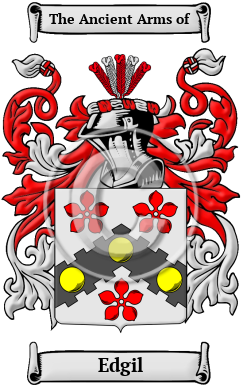 The lineage of the name Edgil begins with the Anglo-Saxon tribes in Britain. It is a result of when they lived in one of the places named Edge-Hill in England. More often than not, Essex is the family's home county.

Early Origins of the Edgil family

The surname Edgil was first found in Essex where the family name was first referenced in the year 1278 when William and Richard Eggell held estates in that county. Other early records revealed that some of the family resided at Standerwick in Somerset.

"Standerwick Court, the seat of Admiral Harry Edgell, is a handsome mansion, in the grounds of which are the remains of an ancient encampment, supposed to have been the connecting station between Bath and Alfred's tower at Stourton." [1]

In Staffordshire at Burntwood, "there are several neat and pleasant mansions, one of which is Edgehill or Edial Hall, a square brick building with a cupola and balustrades, celebrated as the house in which the eminent lexicographer, Samuel Johnson, opened an academy in 1736." [1]

Edge-Hill, near Kington, Warwickshire was the scene of the memorable battle of that name, which occurred in 1642, between the Royal Army, commanded by the king in person, and the parliamentarian forces under the Earl of Essex. [1]

Early History of the Edgil family

This web page shows only a small excerpt of our Edgil research. Another 86 words (6 lines of text) covering the years 1455 and 1487 are included under the topic Early Edgil History in all our PDF Extended History products and printed products wherever possible.

More information is included under the topic Early Edgil Notables in all our PDF Extended History products and printed products wherever possible.

Migration of the Edgil family

To escape the unstable social climate in England of this time, many families boarded ships for the New World with the hope of finding land, opportunity, and greater religious and political freedom. Although the voyages were expensive, crowded, and difficult, those families that arrived often found greater opportunities and freedoms than they could have experienced at home. Many of those families went on to make significant contributions to the rapidly developing colonies in which they settled. Early North American records indicate many people bearing the name Edgil were among those contributors: William Edgell, who arrived in New England in 1720-1725; and Robert Etchells, who landed in Allegany (Allegheny) County, Pa in 1868