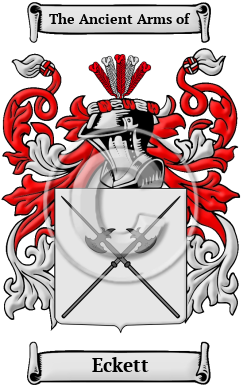 Early Origins of the Eckett family

The surname Eckett was first found in Lincolnshire where the Latin entry Simon filius Echardi was listed in the Curia Regis Rolls of 1219. A few years later, Adam Ecard was listed the Hundredorum Rolls of 1275 for Norfolk. [1] The name denotes "descendant of Agihard (sword edge, brave)." [2] [3]

"The surname lasted for many centuries in Norfolk, and probably still exists there. " [4]

William Echard was rector of Cley, Norfolk in 1515 and Thomas Echard was bailiff of Yarmouth, Norfolk. [5]

Early History of the Eckett family

The English language only became standardized in the last few centuries; therefore,spelling variations are common among early Anglo-Saxon names. As the form of the English language changed, even the spelling of literate people's names evolved. Eckett has been recorded under many different variations, including Eckhard, Echard, Eckert, Eckett and others.

Distinguished members of the family include Laurence Echard (c. 1670-1730) son of the Rev. Thomas Echard or Eachard of Barsham, Suffolk. He was a British historian, best known for his "The History...
Another 31 words (2 lines of text) are included under the topic Early Eckett Notables in all our PDF Extended History products and printed products wherever possible.

Eckett Settlers in New Zealand in the 19th Century