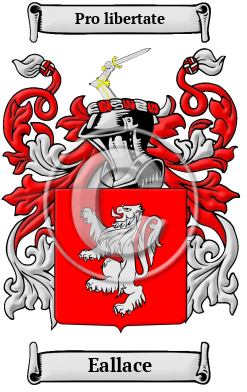 The history of the name Eallace begins in the Scottish/English Borderlands with a family of Strathclyde-Briton ancestry. It is a name for a person who was understood to be foreign. The name is actually an abbreviation of Wallensis, which meant Welsh is derived from the Anglo Norman French word waleis, meaning foreign. It is sometimes difficult for the layman to understand how such a renowned Scottish Clan could be called, literally, Welsh. Yet from the 3rd to the 8th century the Kingdom of Strathclyde stretched from the northern tip of France to the southern shores of the Clyde in Scotland.

This kingdom was composed of solely coastal territories, of regions including Wales, Lancashire, Westmorland and that part of southwest Scotland known as Galloway. Ironically, the first Scottish poem, dated about 1000 AD, was written in Welsh.

Hence, Richard Wallensis was a vassal in 1174 of Walter FitzAlan, the Norman/ Breton who had settled in Salop in England and then moved north to Scotland. He would later found the great line of Scottish Stewart Kings. The Wallensis were undoubtedly the original natives of the area rather than travelers who moved north from the Welsh border in the train of the Stewarts.

Early Origins of the Eallace family

The surname Eallace was first found in Ayrshire (Gaelic: Siorrachd Inbhir Àir), formerly a county in the southwestern Strathclyde region of Scotland, that today makes up the Council Areas of South, East, and North Ayrshire where in 1173 AD Richard Wallensis obtained the lands that belonged to the former kingdom of Strathclyde called Richardstoun (now Riccarton) by a grant from the King. His son, Richard Walency (or Waleis) witnessed several charters between 1190 and 1220, showing his approval of transfers of land in Molle, Kelso, Cupa and Paisley. The Chiefship passed to his grandson, Sir Malcolm Wallace of Elderslie in Renfrewshire, who had acquired those lands, the ancient Clan territories and other lands in Ayrshire. It was the younger son of Malcolm Wallace, William Wallace, born in 1275, who was Scotland's folklore hero. A knight of no small qualification and skill, throughout his life he had maintained a friendship with the House of Stewart. His many exploits started in 1297 when he killed the Sheriff of Lanark.

Wallace continued to harass the English occupying army with such skill and bewildering speed that the English were demoralized. Wallace unified the Clans of Scotland against a common invader. One of the English captains reported that Wallace was lying in Selkirk forest with his army of Clansmen.

An English force moved northwards to destroy him but found itself under siege in Stirling Castle. The Battle of Stirling Bridge was a decisive victory for Wallace, and he was awarded the guardianship of Scotland. He was probably the greatest unifying factor that Scotland ever had. But the English King once more invaded Scotland, set up his own government and Wallace became an outlaw. Betrayed by Sir John de Menteith near Glasgow, he was tried for treason in London and executed on August 23rd, 1305.

But the Clan Wallace lived on with some forty or fifty branches, most of them having their own lands and territories. The Chiefly line of the Wallaces of Riccarton took on the designation of Craigie after acquiring the Craigie estates by marriage. Other important branches started at Cessnock and Kelly in Renfrewshire. The life of Wallace was well documented by "Blind Harry," the minstrel.

Early History of the Eallace family

Medieval Scottish names are rife with spelling variations. This is due to the fact that scribes in that era spelled according to the sound of words, rather than any set of rules. Eallace has been spelled Wallace, Wallis, Wallys, Walace, Uallas (Gaelic) and others.

Notable amongst the family at this time was James Wallace (1642-1688), a Scottish minister in Orkney; Samuel Wallis (1720-1795), an English navigator, eponym of Wallis Island; John Wallis (1616-1703), a British mathematician who introduced the infinity symbol, eponym of the asteroid 31982 Johnwallis; and John Wallace of Craigie who was Lt. General for King James...
Another 55 words (4 lines of text) are included under the topic Early Eallace Notables in all our PDF Extended History products and printed products wherever possible.

Migration of the Eallace family to Ireland

Some of the Eallace family moved to Ireland, but this topic is not covered in this excerpt.
Another 60 words (4 lines of text) about their life in Ireland is included in all our PDF Extended History products and printed products wherever possible.

Migration of the Eallace family

Many Scots were left with few options other than to leave their homeland for the colonies across the Atlantic. Some of these families fought to defend their newfound freedom in the American War of Independence. Others went north to Canada as United Empire Loyalists. The ancestors of all of these families have recently been able to rediscover their roots through Clan societies and other Scottish organizations. Among them: Eleanor, Elizabeth, George, Jane, William, and Mary Wallace all settled in Charles Town [Charleston], South Carolina in 1768; Alexander Wallace settled in Georgia in 1733.