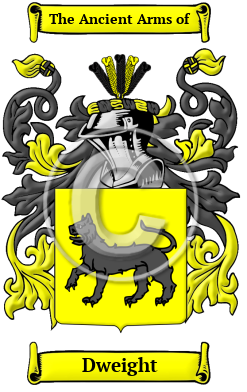 Early Origins of the Dweight family

The surname Dweight was first found in Derbyshire where the first record of the family was in the Latin form: Henry Duyhts who was listed in the Subsidy Rolls there in 1327. [1]

There is much speculation about the origin of this name. One source notes that it is a "corruption of the once common Dyot (v. Dyet and Dyson.) [2]

Another presumes that is was a "pet name of Dionisia (Greek god of wine.)" [3]

Moving on from the aforementioned listing in 1327, fifty-two years later there was another found in the Yorkshire Poll Tax Rolls of 1379: Magota Duyott and this source notes that "the usual form in this register of names is Dyot and Diot." [2]

Early History of the Dweight family

Spelling variations of this family name include: Dwight, Dwite, Dwit, Dweight, Dwyte, Dight and others.

Distinguished members of the family include John Dwight (1628-1703), generally considered the first distinguished English potter, his work can be found today in the British Museum and the Victoria and Albert Museum. On 3 March 1674, Dwight's six-year-old daughter Lydia died. Her statue made in 1674 entitled "Lydia Dwight Resurrected" can be found today in the Victoria and Albert Museum in London...
Another 62 words (4 lines of text) are included under the topic Early Dweight Notables in all our PDF Extended History products and printed products wherever possible.

Migration of the Dweight family