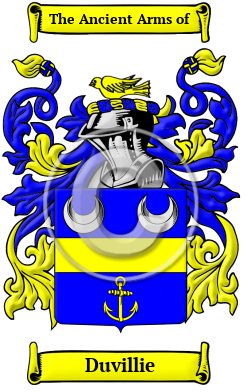 The noble surname Duvillie originated in the region of Maine, in France. Duvillie is a topographic surname, which is a type of hereditary surname. Topographic names were given to a person who resided near a physical feature such as a hill, stream, church, or type of tree. Habitation names form the other broad category of surnames that were derived from place-names. They were derived from pre-existing names for towns, villages, parishes, or farmsteads. Other local names are derived from the names of houses, manors, estates, regions, and entire counties. As a general rule, the greater the distance between individuals and their homelands, the larger the territory they were named after. For example, people who only moved to another parish would be known by the name of their original villages, while people who migrated to a different country were often known by the name of a region or country from which they came. The name Duvillie is derived from the French word "vallée," which means "valley," and literally means "of the valley."

Early Origins of the Duvillie family

The surname Duvillie was first found in Maine, where they held a family seat from very early times.

Early History of the Duvillie family

This web page shows only a small excerpt of our Duvillie research. Another 29 words (2 lines of text) covering the years 1600, 1791, 1800, 1809, 1810, and 1840 are included under the topic Early Duvillie History in all our PDF Extended History products and printed products wherever possible.

Notable amongst the family at this time was General Émile-Victor Duval; and Pierre Duval (1618-1683), a French geographer from Abbeville. Claude Duval (1643-1670), was and English highwayman, born of poor parents at Domfront, Normandy, in 1643. "A report which was current during his lifetime, that he was the son of a cook in Smock Alley, Without Bishopsgate, is sufficiently discredited. At the age of fourteen he was sent to Paris, where he remained in service till the Restoration, when he came to England in attendance on the Duke of Richmond. It was not...
Another 92 words (7 lines of text) are included under the topic Early Duvillie Notables in all our PDF Extended History products and printed products wherever possible.

Migration of the Duvillie family