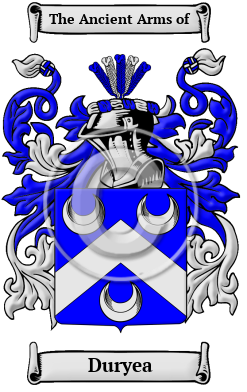 The name Duryea began among the ancestors of the people of an ancient Scottish tribe called the Picts. It was a name for a person who held the office of Dereth.

Early Origins of the Duryea family

The surname Duryea was first found in Fife, where "Durie, [is] an estate in the parish of Scoonie." [1]

Early History of the Duryea family

Although Medieval Scotland lacked a basic set of spelling rules, which meant that scribes recorded names according to their sounds it was not uncommon for the names of a father and son to be recorded differently. As a result, there are many spelling variations of Scottish single names. Duryea has been written Durie, Durray, Doray, Dorie, Durrie and others.

Notable amongst the Clan at this time was Robert Durie (1555-1616), a Scottish Presbyterian minister; and his son, John Dury (1596-1680), a Scottish Calvinist minister and intellectual. He made efforts to re-unite the Calvinist and Lutheran wings of Protestantism. Andrew Durie (d. 1558), was Bishop of Galloway and Abbot of Melrose, the son of John Durie of Durie in Fife, and brother to George Durie. George Durie (1496-1561), was Abbot of Dunfermline and Archdeacon of St. Andrews. "From 1527 till 1530 he acted as judge and executor of the monastery of Arbroath. During...
Another 92 words (7 lines of text) are included under the topic Early Duryea Notables in all our PDF Extended History products and printed products wherever possible.

In the United States, the name Duryea is the 14,645th most popular surname with an estimated 2,487 people with that name. [3]

Migration of the Duryea family to Ireland

Some of the Duryea family moved to Ireland, but this topic is not covered in this excerpt. More information about their life in Ireland is included in all our PDF Extended History products and printed products wherever possible.

Duryea migration to the United States +

Thousands of Scots left their home country to travel to Ireland or Australia, or to cross the Atlantic for the North American colonies. The difficult crossing was an enormous hurdle, but those who survived found freedom and opportunity in ample measure. Some Scots even fought for their freedom in the American War of Independence. This century, their ancestors have become aware of the illustrious history of the Scots in North America and at home through Clan societies and other organizations. Passenger and immigration lists show many early and influential immigrants bearing the name Duryea:

Duryea Settlers in United States in the 17th Century

Duryea Settlers in Australia in the 19th Century