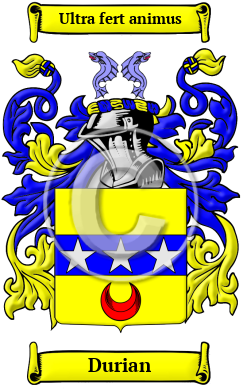 The Durian surname is a habitational name, originally taken on from the city of Durham, in northeastern England. This place name comes from the Old English "dun," meaning "hil." Another source claims the name "is derived from the Saxon Bun and holm, a town in a wood." [1]

Early Origins of the Durian family

The surname Durian was first found in " Durham in the north of England, anciently Dunhelm or Dunholm." [2] [3] The Hundredorum Rolls of 1273 list Walter de Durham and William de Dureham in London and John de Durame in Essex. [4] By far the lion's share of records are found north in Scotland where "Robertus de Durham was one of twelve Scots knights appointed to settle the laws of the marches in 1249. The seal of Walter Durham of Dumfriesshire who rendered homage in 1290 reads S' Valteri Dwrant. " [2]

Early History of the Durian family

Notable amongst the family name during their early history was Alexander Durhame, argentier to the king and queen in 1565; John Durham, English politician, Member of Parliament for Middlesex in 1399; and Alexander Durham, Minder of the Royal Mint. James Durham (1622-1658), was a Scottish covenanting divine...
Another 45 words (3 lines of text) are included under the topic Early Durian Notables in all our PDF Extended History products and printed products wherever possible.

Migration of the Durian family to Ireland

Some of the Durian family moved to Ireland, but this topic is not covered in this excerpt. More information about their life in Ireland is included in all our PDF Extended History products and printed products wherever possible.

Durian migration to the United States +

Durian Settlers in United States in the 19th Century