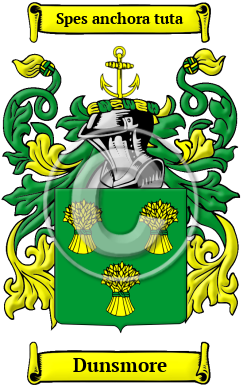 Dunsmore was first used as a surname by descendants of the Pictish people of ancient Scotland. The ancestors of the Dunsmore family lived on the lands of Dundemore in Fife where the family has a long and distinguished history dating back to the early Middle Ages. The name literally means "the fortified hill," and many old strongholds in Scotland are so called. [1]

Early Origins of the Dunsmore family

The surname Dunsmore was first found in Fife, in the territories of Dundemore, near Lindores. One of the first records of the name was Henry de Dundemore who witnessed a confirmation charter by John, Earl of Huntigdoun of land in Kynalchmund to the Abbey of Arboirath c. 1219 and later witnessed another charter by the same earl granting lands of Lundors to the monks of Lindores (c.1232-1237.) [2]

Early History of the Dunsmore family

Repeated and inaccurate translation of Scottish names from Gaelic to English and back resulted in a wide variety of spelling variations with single names. Dunsmore has appeared Dinsmore, Dinsmuir, Dunsmore, Dansmore, Dunmuir and many more.

Another 49 words (4 lines of text) are included under the topic Early Dunsmore Notables in all our PDF Extended History products and printed products wherever possible.

Migration of the Dunsmore family to Ireland

Some of the Dunsmore family moved to Ireland, but this topic is not covered in this excerpt.
Another 54 words (4 lines of text) about their life in Ireland is included in all our PDF Extended History products and printed products wherever possible.

Dunsmore migration to the United States +

Many Scottish families suffered enormous hardships and were compelled to leave their country of birth. They traveled to Ireland and Australia, but mostly to the colonies of North America, where many found the freedom and opportunity they sought. It was not without a fight, though, as many were forced to stand up and defend their freedom in the American War of Independence. The ancestors of these Scots abroad have rediscovered their heritage in the last century through the Clan societies and other organizations that have sprung up across North America. Immigration and passenger ship lists show some important early immigrants bearing the name Dunsmore:

Dunsmore Settlers in United States in the 17th Century

Dunsmore Settlers in United States in the 18th Century

Dunsmore Settlers in United States in the 19th Century

Dunsmore Settlers in Australia in the 19th Century

Dunsmore Settlers in New Zealand in the 19th Century

Historic Events for the Dunsmore family +