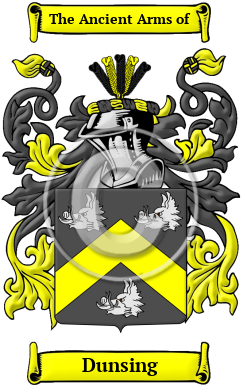 Early Origins of the Dunsing family

The surname Dunsing was first found in Berwickshire where they held a family seat on the English/Scottish border. After the Norman Conquest of England many of Duke William's rebellious Barons moved north. The border became a convenient no-man's land. Notable families such as the Percy, the Umfravilles and the Nevilles gathered many supporting clans around them. In the 16th century they became known as the 'unruly clans'. In that century, many of those clans drove their herds south, and they settled in Yorkshire and Lancashire.

The name was first recorded in Duns in 1150 when Hugh le Duns held the estates. It is most likely that the family were of Norman origin from Dunster Castle and may have been related to William de Moyon of Moion in Normandy. The original Duns Castle was built in 1320 by the Earl of Moray, nephew of Robert the Bruce.

Joannes Scotus Duns, known as the Doctor Subtilis (1265?-1308?), was a schoolman, born according to one tradition about 1265, according to another about 1274. There has been much dispute as to his nationality and birthplace. He is thought to have been an Irishman or Englishman by birth with both opposing researchers putting strong cases for each side. "Among mediæval thinkers Duns is distinguished not only by breadth and depth of learning - he was familiar with the logical treatises of Porphyry and Boetius, and the works of the great Arabian and Jewish schoolmen, such as Averroes and Avicebron." [1]

Early History of the Dunsing family

Spelling variations of this family name include: Duns, Dunse, Dunce, Douns and others.

More information is included under the topic Early Dunsing Notables in all our PDF Extended History products and printed products wherever possible.

Migration of the Dunsing family