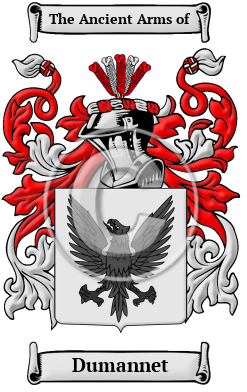 From the historical and enchanting region of France emerged a multitude of noble families, including the distinguished Dumannet family. Originally, the French people were known only by a single name. The process by which hereditary surnames were adopted in France is extremely interesting. Surnames evolved during the Middle Ages when people began to assume an extra name to avoid confusion and to further identify themselves. Often they adopted names that were derived from nicknames. Nickname surnames were derived from an eke-name, or added name. They usually reflected the physical characteristics or attributes of the first person that used the name. The name Dumannet is a nickname type of surname for a fierce or strong man which was in turn derived from the Middle-High-German word man, from which the English word man is derived.

Early Origins of the Dumannet family

The surname Dumannet was first found in Savoy (French: Savoie) in the Rhône-Alpes region of the French Alps, where this celebrated family held a family seat from ancient times. One of the first records of the family was Richard Mennet who was listed in Normandy in 1180-1185. Osbert Minete was later recorded there in 1198 and it seems that some of the family emigrated to England as the Hundredorum Rolls of 1272 list William Monet. [1]

Early History of the Dumannet family

This web page shows only a small excerpt of our Dumannet research. Another 146 words (10 lines of text) covering the years 1552, 1733 and 1800 are included under the topic Early Dumannet History in all our PDF Extended History products and printed products wherever possible.

More information is included under the topic Early Dumannet Notables in all our PDF Extended History products and printed products wherever possible.

Migration of the Dumannet family