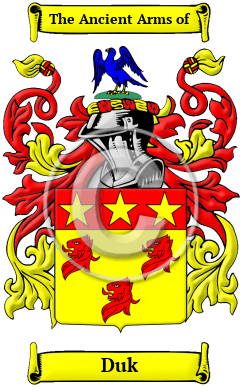 The ancient Norman culture that was established in England after the Conquest of 1066 produced the name of Duk. It was given to a person who had a duck-like gait or bore some other resemblance to a duck. The surname Duk is derived from Old English words duk, dukke, duck, doke, and dook, which all mean duck. However, these words are often indistinguishable from the various Old English words duc, duk, duke, douc, and doke, which all came from the Old French word duc. This ultimately came from the Latin word dux, which means leader, and is a derivative of the verb ducere, which means to lead.

Early Origins of the Duk family

The surname Duk was first found in Somerset where the first record of the family was John le Duk, who was listed there 1 Edward III (during the first year of King Edward III's reign.) [1]

The Rotuli Curiae Regis listed Ralph Dux of Buckinghamshire, 1198. [2] In Cheshire, two early listing were found: Robert Ducke was listed in the Assize Rolls of 1260 and later; Hugo Doke was listed in the Hundredorum Rolls of 1279. [3] In the Yorkshire Poll Tax Rolls of 1379, we found Adam Doke listed as holding lands there at that time. [4]

Early History of the Duk family

Multitudes of spelling variations are a hallmark of Anglo Norman names. Most of these names evolved in the 11th and 12th century, in the time after the Normans introduced their own Norman French language into a country where Old and Middle English had no spelling rules and the languages of the court were French and Latin. To make matters worse, medieval scribes spelled words according to sound, so names frequently appeared differently in the various documents in which they were recorded. The name was spelled Duck, Duche, Ducke and others.

Outstanding amongst the family at this time was Sir Arthur Duck (1580-1648), English civilian, second son of Richard Duck by Joanna, his wife, born at Heavitree, Devonshire. He was born at Heavitree, near Exeter, Devon. the younger son of Richard Duck and his wife Joanna. His elder brother was the lawyer Nicholas Duck (1570-1628) was a prominent lawyer in the city of London. [5] Sir John Duck, 1st Baronet (c. 1632-1691), was an English politician, Mayor of Durham. He "was apprenticed early in life to a butcher at Durham, though from an entry in the guild registers it appears that in 1657...
Another 106 words (8 lines of text) are included under the topic Early Duk Notables in all our PDF Extended History products and printed products wherever possible.

Migration of the Duk family to Ireland

Some of the Duk family moved to Ireland, but this topic is not covered in this excerpt.
Another 30 words (2 lines of text) about their life in Ireland is included in all our PDF Extended History products and printed products wherever possible.

Migration of the Duk family

Because of this political and religious unrest within English society, many people decided to immigrate to the colonies. Families left for Ireland, North America, and Australia in enormous numbers, traveling at high cost in extremely inhospitable conditions. The New World in particular was a desirable destination, but the long voyage caused many to arrive sick and starving. Those who made it, though, were welcomed by opportunities far greater than they had known at home in England. Many of these families went on to make important contributions to the emerging nations of Canada and the United States. Analysis of immigration records indicates that some of the first North American immigrants bore the name Duk or a variant listed above: John Duck who settled in New England in 1654; William Ducke settled in Virginia in 1639; Abigail Ducke settled in Barbados in 1679.