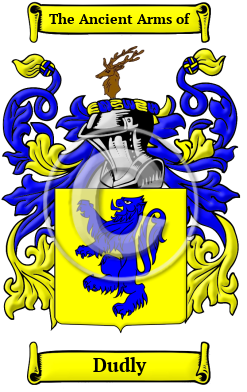 The name Dudly is of Anglo-Saxon origin and came from when the family lived in the important town of Dudley in the county of Worcestershire. The name of this town was originally derived from the Old English personal name Dudda and the Old English word leah, which means woodland clearing; thus it means Dudda's glade. [1]The surname Dudly belongs to the large category of Anglo-Saxon habitation names, which are derived from pre-existing names for towns, villages, parishes, or farmsteads.

Early Origins of the Dudly family

The surname Dudly was first found in Worcestershire at Dudley, a town that dates back to the Domesday Book where it was listed as Dudelei. "This place derives its name from Dodo, or Dudo, a Saxon prince, by whom it was owned at the time of the heptarchy, and who built a castle here about the year 700, which, during the contest between Stephen and the Empress Matilda, was garrisoned for the latter by Gervase Paganell, to whom the barony at that time belonged. Gervase having subsequently taken part in the rebellion of Prince Henry against his father, Henry II., his castle was demolished in the 20th year of that monarch's reign. The present keep, with the gateway and chapel, is of the architecture of the 13th century; the other buildings were erected by John Dudley, Duke of Northumberland, in the time of Edward VI. " [2]

Dudley Castle was listed there and at that time Earl Edwin held the manor also located there. Dudley and much of the surrounding area was held by William fitzAnsculf and was part of the Came hundred. [3]

Today Dudley Castle is a ruined castle but has a visitor's center that was opened by Her Majesty Queen Elizabeth II in June 1994. At one time, the family was found in the chapelry of Singleton-in-the-Fylde (Little Singleton) in Lancashire as evidenced by this entry: "Edmund Dudley, who was attainted and executed in 1510, possessed Little Singleton." [2]

The same Sir Edmund Dudley's lands were lost also lost at Balderston, again in Lancashire. "A portion subsequently passed to the Dudley family; and after the execution of the celebrated Sir Edmund Dudley for high treason, an inquisition was taken, 1st Henry VIII., when it was found that the manor was an escheat to the crown." [2]

Early History of the Dudly family

It is only in the last few hundred years that the English language has been standardized. For that reason, early Anglo-Saxon surnames like Dudly are characterized by many spelling variations. As the English language changed and incorporated elements of other European languages, even literate people changed the spelling of their names. Scribes and monks in the Middle Ages spelled names they sounded, so it is common to find several variations that refer to a single person. The variations of the name Dudly include: Dudley, Dudlie, Dudly and others.

Distinguished members of the family include Sir John Dudley of Atherington; and his son, Edmund Dudley (c.1462-1510), an English administrator and a financial agent of King Henry VII, Speaker of the House of Commons and President of the King's Council; John Dudley, 1st Duke of Northumberland, KG (1504-1553), an English general, admiral, and politician, who led the government of King Edward VI from 1550 until 1553 Thomas Dudley (1576-1653), was an American colonial magistrate from Yardley Hastings, England who served as 3rd, 7th, 11th and 14th Governor of the Massachusetts Bay Colony and...
Another 91 words (6 lines of text) are included under the topic Early Dudly Notables in all our PDF Extended History products and printed products wherever possible.

Migration of the Dudly family to Ireland

Some of the Dudly family moved to Ireland, but this topic is not covered in this excerpt. More information about their life in Ireland is included in all our PDF Extended History products and printed products wherever possible.

Dudly migration to the United States +

Many English families tired of political and religious strife left Britain for the new colonies in North America. Although the trip itself offered no relief - conditions on the ships were extremely cramped, and many travelers arrived diseased, starving, and destitute - these immigrants believed the opportunities that awaited them were worth the risks. Once in the colonies, many of the families did indeed prosper and, in turn, made significant contributions to the culture and economies of the growing colonies. An inquiry into the early roots of North American families has revealed a number of immigrants bearing the name Dudly or a variant listed above:

Dudly Settlers in United States in the 17th Century

Dudly Settlers in United States in the 18th Century

Dudly Settlers in Canada in the 19th Century