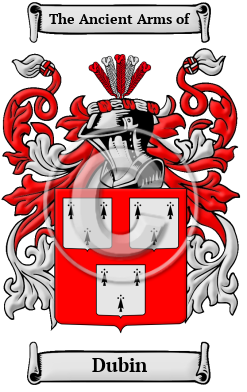 The prestigious surname Dubin comes from the region of Provence, in France. The surname Dubin is of local origin, and is therefore a type of hereditary surname. Local surnames are derived either from an already existing place-name or from a local feature of the geography.

Early Origins of the Dubin family

The surname Dubin was first found in Provence where this esteemed family has held a family seat since ancient times.

Originating from the d'Ubaye river region in this province, the family grew and branched to Brittany (French: Bretagne), where members were known as the Dube de la Garenne family, and were noted for their devoted service to the King and for their contributions in their communities. In the middle of the 19th century, members of this family immigrated to the New World, where they flourished and became a notable and large family.

Mathurin Dube, born in 1631, son of Jean and Renée, travelled from Normandy to Canada in the 17th century. He married Marie Campion at Sainte-Famille, Quebec on 3rd September 1670. They had nine children together, 5 daughters and 4 sons. [1]

Early History of the Dubin family

This web page shows only a small excerpt of our Dubin research. More information is included under the topic Early Dubin History in all our PDF Extended History products and printed products wherever possible.

More information is included under the topic Early Dubin Notables in all our PDF Extended History products and printed products wherever possible.

In the United States, the name Dubin is the 10,923rd most popular surname with an estimated 2,487 people with that name. [2]

Dubin migration to the United States +

Dubin Settlers in United States in the 19th Century