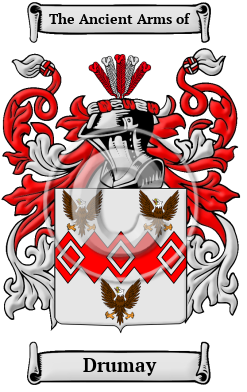 The annals of Scottish history reveal that Drumay was first used as a name by ancestors of the Pictish tribe of ancient Scotland. The Drumay family lived on the lands of Drum, in the parish of Drumoak in Aberdeenshire where the name can be found since very early times.

Early Origins of the Drumay family

The surname Drumay was first found in Aberdeenshire (Gaelic: Siorrachd Obar Dheathain), a historic county, and present day Council Area of Aberdeen, located in the Grampian region of northeastern Scotland. The family is of local origin from Drum in the parish of Drumoak. "The original name of this place was Dalmaik, by which it is still generally called by the inhabitants, though the denomination of Drumoak has also been used for more than 300 years; the latter appellation is said to be derived from the Gaelic word drum, signifying the ridge of a hill, and the term Moloch, corrupted into Moak, the name of a celebrated saint to whose honour a monastery was erected in St. Servanus' isle, on the water of Leven. The name of Dalmaik is compounded of the Gaelic Dal, a haugh or valley, and St. Moloch, corrupted into Maik, and signifies the valley of St. Moloch, a description applicable to the district containing the ruins of the old church, near which is a well called St. Maik's Well. " [1] Drum is one of the four estates in the parish. The lands of Cutler have been held by the family from a very early period. Some of the first records of the name were: John de Drum who was prebendary of Butirgill, 1372, and another John de Drum who was prebendary of Buthirgill in 1449. [2]

Early History of the Drumay family

This web page shows only a small excerpt of our Drumay research. Another 53 words (4 lines of text) covering the years 1539, 1600, 1685, 1748 and are included under the topic Early Drumay History in all our PDF Extended History products and printed products wherever possible.

Before the first dictionaries appeared in the last few hundred years, scribes spelled according to sound. spelling variations are common among Scottish names. Drumay has been spelled Drum, Drumm and others.

More information is included under the topic Early Drumay Notables in all our PDF Extended History products and printed products wherever possible.

Migration of the Drumay family to Ireland

Some of the Drumay family moved to Ireland, but this topic is not covered in this excerpt.
Another 88 words (6 lines of text) about their life in Ireland is included in all our PDF Extended History products and printed products wherever possible.

Migration of the Drumay family

In those unstable times, many had no choice but to leave their beloved homelands. Sickness and poverty hounded travelers to North America, but those who made it were welcomed with land and opportunity. These settlers gave the young nations of Canada and the United States a strong backbone as they stood up for their beliefs as United Empire Loyalists and in the American War of Independence. In this century, the ancestors of these brave Scots have begun to recover their illustrious heritage through Clan societies and other heritage organizations. Early passenger and immigration lists reveal many Scottish settlers bearing the name Drumay: Phillip Drum who settled in Philadelphia in 1738; as well as Adam, Bernard, Charles, Daniel, James, John, Mary, Patrick, Thomas, and William, who all came to Philadelphia between 1840 and 1870..