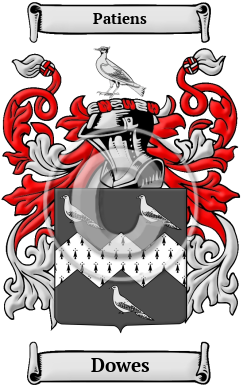 Early Origins of the Dowes family

The surname Dowes was first found in Berwickshire where the name is likely from the Gaelic, Dhu (dubh), Anglicized as "black" or from "don or doo," the Scottish for dove or pigeon. [1]

Early History of the Dowes family

Notable amongst the family name during their early history was Henry Dove, (1640-1695), Archdeacon of Richmond, son of a clergyman, born in 1640, and elected from Westminster to Trinity College, Cambridge, in 1658. He was also a politician, Mayor of Salisbury, Wiltshire in 1616. John Dove (1561-1618), was 'a Surrey man, born of plebeian parents,' and scholar of St. Peter's College, Westminster, whence...
Another 61 words (4 lines of text) are included under the topic Early Dowes Notables in all our PDF Extended History products and printed products wherever possible.

Migration of the Dowes family to Ireland

Some of the Dowes family moved to Ireland, but this topic is not covered in this excerpt. More information about their life in Ireland is included in all our PDF Extended History products and printed products wherever possible.

Dowes migration to the United States +

Dowes Settlers in United States in the 19th Century