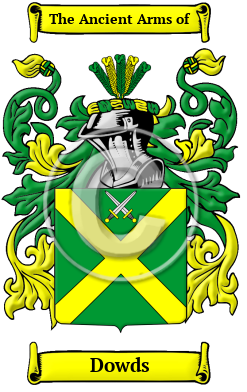 The original Gaelic form of Dowds was O Dubhda. The first portion of the name comes from the word dubh, which means black or dark complexioned. [1]

Early Origins of the Dowds family

The surname Dowds was first found in County Mayo (Irish: Maigh Eo) located on the West coast of the Republic of Ireland in the province of Connacht. King Niall, brother of Fiachra and descended from Daithi, was one of the last pagan Kings of Ireland. For centuries they were the leading sept of northern Ui Fiachrach. Their territory comprised the baronies of Erris and Tirawley in the county of Mayo and Tireagh in Sligo. [2] They were the traditional Princes of Hy-Fiachra in Connaught. [1]

Early History of the Dowds family

Those scribes in Ireland during the Middle Ages recorded names as they sounded. Consequently, in this era many people were recorded under different spellings each time their name was written down. Research on the Dowds family name revealed numerous spelling variations, including Dowd, Duddy, Doody, O'Dowd, Dowdy, Dowdie, Doudy, Doudie, Doudd, Doodie and many more.

Notable amongst the family name at this time was Father John O'Duada (d. 1579) one of many Irish Franciscan martyrs when he was tortured and hanged in 1579; and Samuel Doody (1656-1706), an early English botanist...
Another 35 words (2 lines of text) are included under the topic Early Dowds Notables in all our PDF Extended History products and printed products wherever possible.

Dowds Settlers in New Zealand in the 19th Century