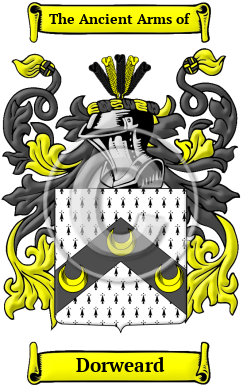 Early Origins of the Dorweard family

The surname Dorweard was first found in the Valley of the River Dee, where they held a family seat in their territories. The Pictish influence on Scottish history diminished after Kenneth Macalpine became King of all Scotland.

Early History of the Dorweard family

This web page shows only a small excerpt of our Dorweard research. Another 94 words (7 lines of text) covering the years 1465 and 1745 are included under the topic Early Dorweard History in all our PDF Extended History products and printed products wherever possible.

More information is included under the topic Early Dorweard Notables in all our PDF Extended History products and printed products wherever possible.

Migration of the Dorweard family

Numerous Scottish settlers settled along the east coast of the colonies that would become the United States and Canada. Others traveled to the open country of the west. At the time of the American War of Independence, some remained in the United States, while those who remained loyal to the crown went north to Canada as United Empire Loyalists. The highland games and Clan societies that sprang up across North America in the 20th century have helped many Scots to recover parts of their lost traditions. Research into passenger and immigration lists has revealed some of the very first Dorweards to arrive in North America: Tho Dorwood, who came to Virginia in 1657.