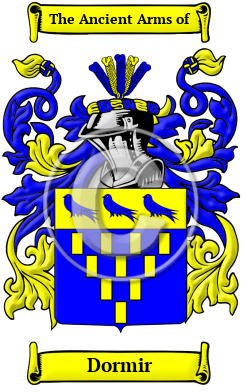 Early Origins of the Dormir family

The surname Dormir was first found in Buckinghamshire at Wyng (Wing), a village and civil parish in Aylesbury Vale district. [1]

"The Dormers of Buckinghamshire and Oxfordshire were prosperous wool merchants well established here since the early 16th century."

"The Dormers were landed gentlemen in Oxfordshire in the time of Elizabeth, and the family was ennobled in 1615, Peterley House, Bucks, being in its possession in the 17th century (Napier's "Swyncombe" and Wing's "Steeple Barton"). A Leicestershire family of Dormer in the 17th century settled afterwards in Ireland." [2]

Early History of the Dormir family

Spelling variations of this family name include: Dormer, Tormer, Dormar, Dormir, Domer, Domar and others.

Distinguished members of the family include Sir Robert Dormer (died 1552), of West Wycombe and Wing, Buckinghamshire, and London; and his son, Sir William Dormer (c. 1514-1575) was a Tudor knight, captain and politician, best known for a broken engagement to Jane Seymour, who later became the third wife of Henry VIII; Robert Dormer, 1st Baron Dormer (1551-1616), English politician, High Sheriff of Buckinghamshire in 1584, Member of Parliament for Buckinghamshire from 1592 to 1593; Robert Dormer, 1st Earl of Carnarvon (1610-1643), an English peer; John Dormer (c.1611-1679), an English politician who sat in the House of Commons at between 1645...
Another 128 words (9 lines of text) are included under the topic Early Dormir Notables in all our PDF Extended History products and printed products wherever possible.

Migration of the Dormir family to Ireland

Some of the Dormir family moved to Ireland, but this topic is not covered in this excerpt.
Another 36 words (3 lines of text) about their life in Ireland is included in all our PDF Extended History products and printed products wherever possible.

Migration of the Dormir family