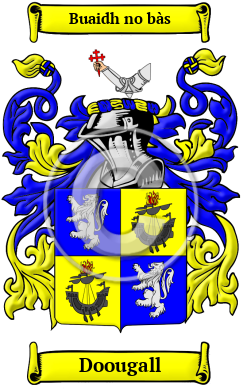 The ancient Dalriadan clans of Scotland spawned the name Doougall. It is derived from the personal name Dougal. The Gaelic form of the name is Mac Dhughaill and literally means son of Dougal.

Early Origins of the Doougall family

The surname Doougall was first found in Galloway (Gaelic: Gall-ghaidhealaibh), an area of southwestern Scotland, now part of the Council Area of Dumfries and Galloway, that formerly consisted of the counties of Wigtown (West Galloway) and Kirkcudbright (East Galloway), where they were descended from Dugall eldest son of Somerled, first Lord of the Isles, and his son Duncan who received the lands of Lorn.The Clan was a bitter foe of Robert the Bruce, who made a narrow escape during one battle with the MacDougals only by discarding his cloak. The brooch of this cloak, now known as the Brooch of Lorn, is a treasured possession of the Chief of the Clan. The Clan faced heavy retaliation and was stripped of their lands once Robert the Bruce secured the Scottish throne. The lands were restored to the Clan upon the death of the king, but passed to the Stewarts in 1388 when the last member of the senior branch of MacDougals died without issue.

Early History of the Doougall family

This web page shows only a small excerpt of our Doougall research. Another 154 words (11 lines of text) covering the years 1175, 1244 and 1316 are included under the topic Early Doougall History in all our PDF Extended History products and printed products wherever possible.

In the Middle Ages, the translation between Gaelic and English was not a highly developed process. Spelling was not yet standardized, and so, an enormous number of spelling variations appear in records of early Scottish names. Doougall has appeared as MacDougall, MacDowall, MacDowell, MacDugald, MacDill and many more.

Another 44 words (3 lines of text) are included under the topic Early Doougall Notables in all our PDF Extended History products and printed products wherever possible.

Migration of the Doougall family to Ireland

Some of the Doougall family moved to Ireland, but this topic is not covered in this excerpt. More information about their life in Ireland is included in all our PDF Extended History products and printed products wherever possible.

Migration of the Doougall family

Many settled along the east coast of what would become the United States and Canada. As the American War of Independence broke out, those who remained loyal to the crown went north to Canada as United Empire Loyalists. The ancestors of all of these hardy Dalriadan-Scottish settlers began to recover their collective history in the 20th century with the advent of the vibrant culture fostered by highland games and Clan societies in North America. Highland games, clan societies, and other organizations generated much renewed interest in Scottish heritage in the 20th century. The Doougall were among the earliest of the Scottish settlers as immigration passenger lists have shown: Ralph, Patrick and Mary MacDougal settled in Charles Town [Charleston], South Carolina in 1767; Dougal and Hugh MacDougal settled in Charles Town in 1767.