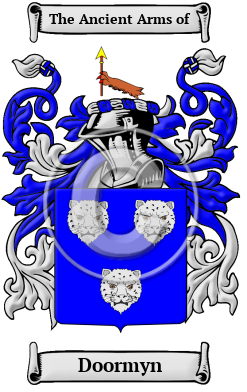 The first family to use the name Doormyn lived in the area that was once the ancient Scottish kingdom of Dalriada. It is a name for a door attendant. The name is also a nickname type of surname derived from the Old English word deore, which means "beloved", and "man"

Early Origins of the Doormyn family

The surname Doormyn was first found in Fife, the name Dorman is derived from the word door-ward. This official hereditary position involved being the door attendant to the King of Scotland. The office of door-ward to the king was a very honorable one and was passed on in the powerful family of de Lundin Fife. The first who took his name from this office was Thomas de Lundyn in 1204. His son, Alan Durward, was one of the greatest names in Scottish history in the thirteenth century. [1]

Early History of the Doormyn family

This web page shows only a small excerpt of our Doormyn research. Another 214 words (15 lines of text) covering the years 1228, 1452, 1478, 1511, 1636, 1572 and are included under the topic Early Doormyn History in all our PDF Extended History products and printed products wherever possible.

Translation in medieval times was an undeveloped science and was often carried out without due care. For this reason, many early Scottish names appeared radically altered when written in English. The spelling variations of Doormyn include Dorman, Dorward, Doorman, Durward and others.

Another 45 words (3 lines of text) are included under the topic Early Doormyn Notables in all our PDF Extended History products and printed products wherever possible.

Migration of the Doormyn family to Ireland

Some of the Doormyn family moved to Ireland, but this topic is not covered in this excerpt.
Another 57 words (4 lines of text) about their life in Ireland is included in all our PDF Extended History products and printed products wherever possible.

Migration of the Doormyn family

Many settled along the east coast of what would become the United States and Canada. As the American War of Independence broke out, those who remained loyal to the crown went north to Canada as United Empire Loyalists. The ancestors of all of these hardy Dalriadan-Scottish settlers began to recover their collective history in the 20th century with the advent of the vibrant culture fostered by highland games and Clan societies in North America. Highland games, clan societies, and other organizations generated much renewed interest in Scottish heritage in the 20th century. The Doormyn were among the earliest of the Scottish settlers as immigration passenger lists have shown: A Peter Dorman settled in Virginia in 1652. Sarah and Richard Dorman were included on passenger lists in 1656.