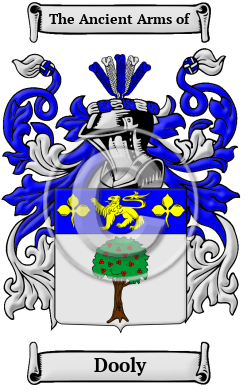 While many Irish names are familiar, their past incarnations are often shrouded in mystery, reflecting the ancient Gaelic heritage of their bearers. The original Gaelic form of the name Dooly is O Dubhlaoich, derived from the words dubh, which means "dark featured, great, prodigious, burned" [1], and laoch, referring to a hero or champion.

Early Origins of the Dooly family

The surname Dooly was first found in Westmeath (Irish: An Iarmhí) in the Irish Midlands, province of Leinster, where they held a family seat from very ancient times. According to O'Hart, the family claim descent through the MacMorough family which are descendants of the Heremon Kings of Ireland and were Chiefs in the County Wicklow and Queen's County. [1]

Early History of the Dooly family

Irish names recorded during the Middle Ages are characterized by many spelling variations. This preponderance of variations for common names can be explained by the fact that the scribes and church officials that kept records during that period individually decided how to capture one's name. These recorders primarily based their decisions on how the name was pronounced or what it meant. Research into the name Dooly revealed many variations, including Dooley, Dooly, O'Dooley, O'Dooly and others.

Notable amongst the family name at this time was Richard Dowley (1622-1702), English nonconformist divine, son of John Dowley, vicar of Alveston, near Stratford-on-Avon, Warwickshire. Sir James Dowling (1787-1844), was a Australian colonial judge, born in London on 25 Nov. 1787. His father, Vincent Dowling, was a native of Queen's...
Another 49 words (4 lines of text) are included under the topic Early Dooly Notables in all our PDF Extended History products and printed products wherever possible.

Dooly migration to the United States +

A great wave of Irish migration occurred during the 19th century as a direct result of English colonial rule and tight-fisted absentee landlords. Many of these Irish immigrants boarded passenger ships bound for North America. Those who migrated early enough were given land in either British North America or the United States; those who came in the late 19th century were typically employed in industrial centers as laborers. At whatever age they undertook the dangerous passage to North America, those Irish immigrants were essential to the speedy development of the two infant nations to which they arrived, whether they broke and settled land, helped build canals, bridges, and railroads, or produced products for consumer consumption. An examination of immigration and passenger lists has uncovered a large number of immigrants bearing the name Dooly or one of its variants:

Dooly Settlers in United States in the 17th Century

Dooly Settlers in United States in the 19th Century

Dooly Settlers in Canada in the 19th Century

Dooly Settlers in Australia in the 19th Century

Historic Events for the Dooly family +