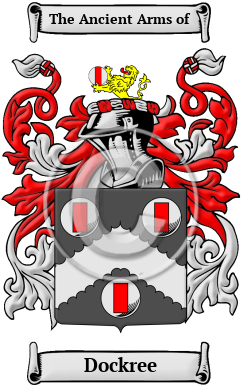 Early Origins of the Dockree family

The surname Dockree was first found in Cumberland where they held a family seat on the English/Scottish border.

The name was first recorded in Dockwray, a hamlet in Matterdale in Cumberland. John de Dockwra was recorded with estates in 1332. In 1467 Robert Dockra succeeded to the estates. Isabel Dockray was listed in 1560. [1]

Early History of the Dockree family

Notable amongst the family name during their early history was Sir Thomas Docwra, (d. 1527) Grand Prior of Clerkenwell Priory, where he is buried. "He was descended from an old Westmoreland family, the Docwras of Docwra Hall in Kendal; but he came of a younger branch which had been for some generations settled in Hertfordshire." [2] William Dockwra or Dockwray (c. 1635-1716), was an English merchant who co-founded the first Penny Post in...
Another 72 words (5 lines of text) are included under the topic Early Dockree Notables in all our PDF Extended History products and printed products wherever possible.

Migration of the Dockree family