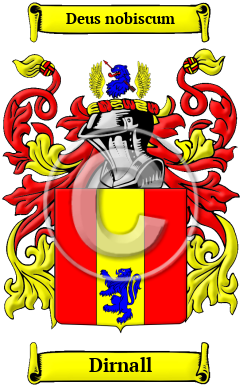 The many generations and branches of the Dirnall family can all place the origins of their surname with the ancient Anglo-Saxon culture. Their name reveals that an early member worked as a grower of darnel, a plant believed to induce intoxication. The name's origins are Old French; darnel is the French name for this plant. It was brought into England by the Normans after the Norman Conquest of 1066. [1]

Early Origins of the Dirnall family

The surname Dirnall was first found in the West Riding of Yorkshire at Darnell, a hamlet, in the parish and union of Sheffield, S. division of the wapentake of Strafforth and Tickhill. Darnhall is a township in Cheshire, 6 miles from Middlewich and this township may also be the origin of the name. [3]

Early History of the Dirnall family

Before the last few hundred years, the English language had no fast system of spelling rules. For that reason, spelling variations are commonly found in early Anglo-Saxon surnames. Over the years, many variations of the name Dirnall were recorded, including Darnell, Darnall, Darnoll, Darnel, Darnal, Darnol, Darnhill, Dartnall, Dartnell and many more.

Notables of the family at this time include Sir Thomas Darnell, 1st Baronet (died c. 1638), an English landowner, at the centre of a celebrated state legal case in the reign of Charles I of England, often known as the "Five Knights' Case" but to the lawyers of the period as "Darnell's Case." Philip Darnall (born 1604), was an English barrister; and his son, Colonel Henry Darnall (1645-1711), emigrated to North America to become a wealthy Maryland Roman Catholic planter, 3rd Baron Baltimore...
Another 82 words (6 lines of text) are included under the topic Early Dirnall Notables in all our PDF Extended History products and printed products wherever possible.

Migration of the Dirnall family

To escape oppression and starvation at that time, many English families left for the "open frontiers" of the New World with all its perceived opportunities. In droves people migrated to the many British colonies, those in North America in particular, paying high rates for passages in cramped, unsafe ships. Although many of the settlers did not make the long passage alive, those who did see the shores of North America perceived great opportunities before them. Many of the families that came from England went on to make essential contributions to the emerging nations of Canada and the United States. Research into various historical records revealed some of first members of the Dirnall family emigrate to North America: Thomas Darnel, who arrived in Maryland in 1684; Richard Durnel, a bonded passenger who arrived in Barbados in1669; Mr. & Mrs. H. Darnell who arrived in San Francisco California with 2 children in 1856.