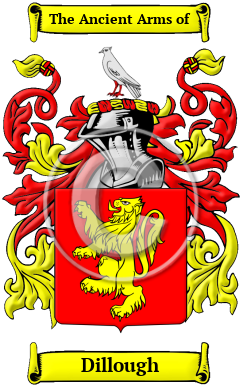 The Dillough surname finds its earliest origins with the ancient Anglo-Saxon culture of Britain. Their name is derived from the baptismal name meaning the son of Dilk. The surname was originally of Dutch origin and was brought into England during the Norman Conquest of 1066. Baptismal names began to appear as surnames relatively late in the growth of the naming tradition. This is a little surprising, given the popularity of biblical figures in the Christian countries of Europe. Nevertheless, surnames derived from baptismal names grew in popularity during the Middle Ages, and have become one of the foremost sources for surnames.

Early Origins of the Dillough family

The surname Dillough was first found in Warwickshire. "Maxstoke Castle is the property of Capt. Thomas Dilke, R.N., a descendant of Sir Thomas Dilke, who purchased it in the 41st of Elizabeth from Sir Thomas Egerton, keeper of the great seal: the buildings occupy an irregular quadrilateral area, inclosed by an embattled wall, and defended at the angles by octagonal towers, and are in a fine state of preservation." [1]

Early History of the Dillough family

This web page shows only a small excerpt of our Dillough research. Another 48 words (3 lines of text) covering the years 1635, 1624, 1624, 1633, 1667, 1707 and 1692 are included under the topic Early Dillough History in all our PDF Extended History products and printed products wherever possible.

It is only in the last few hundred years that the English language has been standardized. For that reason, early Anglo-Saxon surnames like Dillough are characterized by many spelling variations. As the English language changed and incorporated elements of other European languages, even literate people changed the spelling of their names. The variations of the name Dillough include: Dilke, Dilkes, Dilks, Dilley, Dill, Dillow and others.

Distinguished members of the family include Roger Delk (Dilke, Delke, or Dilk) (died before 1635) English-born, representative for Stanley's Hundred in the House of Burgesses. He traveled from England to Virginia aboard the ship "Southampton" in 1624. He was indentured to John Chew and employed in 1624 on his plantation on Hog Island. He rose to represent the Stanley Hundred...
Another 60 words (4 lines of text) are included under the topic Early Dillough Notables in all our PDF Extended History products and printed products wherever possible.

Migration of the Dillough family

Many English families tired of political and religious strife left Britain for the new colonies in North America. Although the trip itself offered no relief - conditions on the ships were extremely cramped, and many travelers arrived diseased, starving, and destitute - these immigrants believed the opportunities that awaited them were worth the risks. Once in the colonies, many of the families did indeed prosper and, in turn, made significant contributions to the culture and economies of the growing colonies. An inquiry into the early roots of North American families has revealed a number of immigrants bearing the name Dillough or a variant listed above: Clement and Mrs. Dilke who settled in Virginia in 1623; Mary Dilkill settled in New England in 1767; Lawrence Dill settled in Summers Island in 1673; Adam, Adolph, George, John, Margaret, Nancy Dill arrived in Philadelphia between 1840 and 1860..