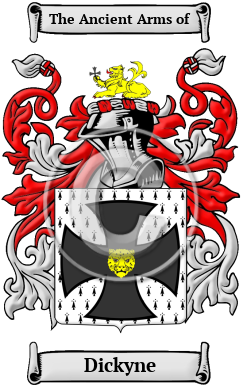 Dickyne is an ancient Norman name that arrived in England after the Norman Conquest of 1066. The name Dickyne comes from the Norman baptismal name which means the son of Diccon, which is a diminution of the parent name, Richard. [1]

Baptismal names began to appear as surnames relatively late in the growth of the naming tradition. This is a little surprising, given the popularity of biblical figures in the Christian countries of Europe. Nevertheless, surnames derived from baptismal names grew in popularity during the Middle Ages, and have become one of the foremost sources for surnames. Most of the early appearances of the name were found in the French form Dicon, which lingered until the 16th century.

Early Origins of the Dickyne family

The surname Dickyne was first found in Staffordshire where one of the first listings of the name was Richard Dicum who listed in the Assize Rolls there in 1203. The Subsidy Rolls of Staffordshire list John Dycon in 1327. [2]

The reader should pay special attention to the term "mayden" in the last entry as while the modern spelling is obviously "maiden," we must realize that as it was noted in the rolls, Alicia Dycon was a woman who held lands and was a person of distinction; a feat rarely seen in the 13th century! Today most of the spellings of the surname are usually seen appended with "s."

Early History of the Dickyne family

Anglo-Norman names tend to be marked by an enormous number of spelling variations. This is largely due to the fact that Old and Middle English lacked any spelling rules when Norman French was introduced in the 11th century. The languages of the English courts at that time were French and Latin. These various languages mixed quite freely in the evolving social milieu. The final element of this mix is that medieval scribes spelled words according to their sounds rather than any definite rules, so a name was often spelled in as many different ways as the number of documents it appeared in. The name was spelled Dickens, Dickins, Diggons, Diggens, Diggins, Dikens, Digons, Diquon and many more.

Outstanding amongst the family at this time was Charles John Huffam Dickens (1812-1870), popular English novelist, buried in Westminster Abbey. Mrs Dickons, daughter of a gentleman named Poole, was born in London about 1770. Her musical talent was early developed. She became a pupil of Rauzzini, and in 1787 appeared at Vauxhall Gardens as a singer. Her progress was rapid, and she became engaged at the Concert of Ancient Music and other concerts. On Oct...
Another 74 words (5 lines of text) are included under the topic Early Dickyne Notables in all our PDF Extended History products and printed products wherever possible.

Migration of the Dickyne family to Ireland

Some of the Dickyne family moved to Ireland, but this topic is not covered in this excerpt.
Another 58 words (4 lines of text) about their life in Ireland is included in all our PDF Extended History products and printed products wherever possible.

Migration of the Dickyne family

Because of the political and religious discontent in England, families began to migrate abroad in enormous numbers. Faced with persecution and starvation at home, the open frontiers and generally less oppressive social environment of the New World seemed tantalizing indeed to many English people. The trip was difficult, and not all made it unscathed, but many of those who did get to Canada and the United States made important contributions to the young nations in which they settled. Some of the first North American settlers with Dickyne name or one of its variants: Edward Dickens who settled in Barbados in 1683; Hugh Dicken settled in Virginia in 1623; Thomas Dicken settled in Antigua in 1685; Henry Dickens settled in Nantucket in 1823.